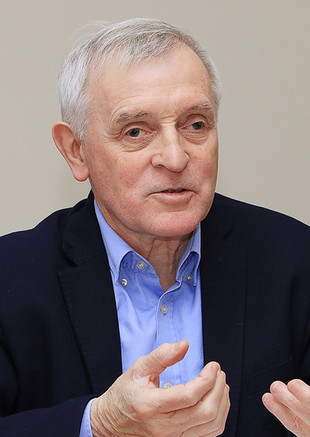 Research director (emeritus) at the CEA, Jean Jouzel is an expert in climate and glaciology. He has mainly worked on the reconstruction of past climate derived from the study of the Antarctic and Greenland ice. He has been a vice-chair of the Scientific Working Group of the IPCC (co-recipient of the Nobel Peace Prize 2007) from 2002 to 2015.  From 2001 to 2008, he headed the Institute Pierre Simon Laplace. His work has been recognized with awards such as Milankovitch and Revelle medals. Together with Claude Lorius, he was awarded the gold medal by the CNRS in 2002. In 2012, with Susan Solomon, he was awarded the Vetlesen Prize, which is referred to as the “ Nobel Prize for Earth sciences”. In 2016, he has been elected as a foreign member of NAS (US National Academy of Sciences) and in 2017 as a member of the French Academy of Sciences.

He has chaired the Earth System Science panel (PE10) of the ERC (European Research Council) advanced grants in 2009, 2011 and 2013. Since 2009, he is the President of the association Météo et Climat, founded as French Meteorological Society. Since 2010, he is a member of CESE (the Economic, Social and environmental Council, the third assembly in France).