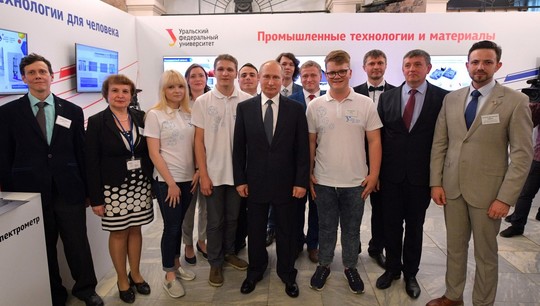 University start-uppers–young researchers and entrepreneurs–presented their projects to the President of Russia Vladimir Putin at the “Technologies for Humans” and “Industrial Technologies and Materials” exhibitions in the first building of Ural Federal University on Lenina avenue in Ekaterinburg.

‘These are technological projects of teams “raised up” at the University: from basic research to prototypes that are of interest for investors,’ says UrFU’s Rector Victor Koksharov. They all received support from our Innovative System, and many were supported by the Bortnik and Skolkovo funds.’

Thus, a new type of ESR spectrometer for molecular analysis of substances, while featuring mobility and low cost, has considerable potential: it allows to conduct early diagnosis of oncological diseases or high-dose dosimetry, as well as check quality of food. The device is now undergoing certification, the implementation is planned before the end of this year.

‘Institutes of Kazan, Novosibirsk and a number of other cities have already acquired the device,’ says Aleksandr Cherepanov, Deputy Director of UrFU’s Center for Coordination with Enterprises. ‘There are analogues in Germany and Japan, but they are more expensive and more difficult to use.’

Absence of domestic analogues combined with high demand in the market is a feature of the multichannel magnetometric complex, another device presented to the President. The scientists demonstrated a ground-based version of the four-channel archaeological magnetometer, which allows searching for hidden magnetic objects. Marine and air modifications are already being developed.

‘The exhibition also includes a number of projects by the participants of the Ural Project Sessions of our School of Talents, where school students work under the guidance of the university teachers and partners,’ adds Victor Koksharov.

The President’s visit continued with a meeting with the university students.