Vladimir Putin: “Nothing Is Possible Without New Materials”
More

Vladimir Putin: “Nothing Is Possible Without New Materials” 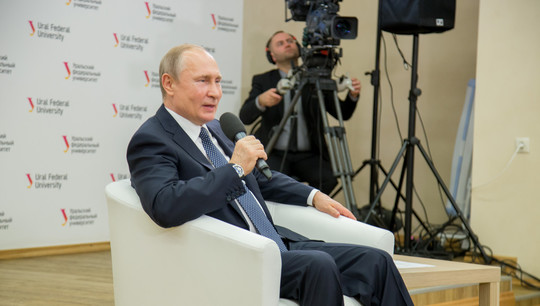 The development of new materials is within the competence of the research and education center (REC) which soon will be established in Ural Federal University. And it was one of the topics discussed during the meeting of the President of Russia Vladimir Putin with students and researchers of Ural Federal University held in Ekaterinburg, along with other scientific interests of the university, students' initiatives concerning employment and interstate relations.

‘We have long been setting the task of developing this field in the country,’ Putin said, responding to a question about the production of high-purity beryllium based on the Malyshevsky deposit in the Sverdlovsk region. ‘There is no doubt that the university can and should take part in it, because you are near and you have the expertise. You must be directly connected to this work.’

Post-graduate student of the UrFU Institute of Natural Sciences and Mathematics Iulia Kuznetsova who asked the question is developing sorption technologies for beryllium in the scientific school of Professor Vladimir Rychkov.

‘I really like that university provides the opportunity to not only do research, but also develop and implement new technology much needed in manufacturing. Even down to the preparation of technical and design documentation,’ Iulia says.

Import phase put solutions were also paid proper attention during the meeting. The president learned about the technology of extracting strategically important material (rare-earth materials and beryllium) at the “Industrial Technologies and Materials” exhibition in Ural Federal University.

The research and education center which will be established according to the agreement signed at INNOPROM today by the governors of Sverdlovsk, Chelyabinsk and Kurgan regions will focus on advanced industrial technologies. The center will pool the capacities of real economy educational and research institutions of the three regions in conducting applied research and working on world-class developments, as well as creating competitive products and technologies to be commercialized.

Answering the question of the UrFU Institute of Radio Electronics and Information Technologies postgraduate student Leyla Kozhakova, who is also a head of the Kazakhstan Alumni Association, Vladimir Putin embraced the idea to visit the 100 anniversary of the university next year, inviting the first president of Kazakhstan, honorary doctor of UrFU Nursultan Nazarbayev.

In addition, the head of the country commended the capacities of the UrFU Student Union in the field of employment and supported the idea of ​​the head of the organization Oybek Partov to hold the All-Russian Career Night. The meeting ended with group photography.