Certain Facilities of Universiade-2023 will be Given Over to UrFU, Says Vladimir Putin
More

Certain Facilities of Universiade-2023 will be Given Over to UrFU, Says Vladimir Putin 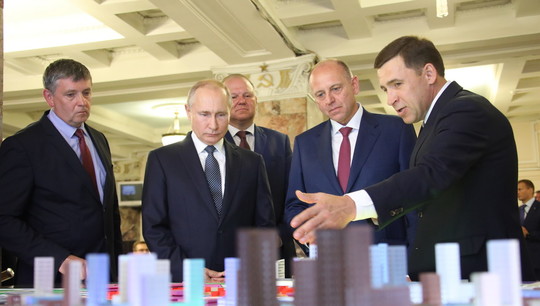 A number of facilities that are planned to be constructed for the Universiade-2023 in Ekaterinburg will be given over to Ural Federal University, as said by the President of Russia Vladimir Putin at his meeting with UrFU students.

‘The largest facilities of the Universiade will suit for housing the University’s faculties, educational and research development centers, and some of them will most definitely be used for sport’, promised Putin.

According to the President, the sport facilities constructed for the Universiade, such as water sports complex, will be available to UrFU students.

‘Undoubtedly, the students will be using all the infrastructure that is to be created,’ said Vladimir Putin.

The decision to hold the Universiade in Ekaterinburg was taken by the Executive Committee of the International University Sports Federation (FISU) at a meeting in Naples on July 2, where UrFU’s Rector Victor Koksharov took part in the presentation of Ekaterinburg’s bid.

‘The Universiade will leave us with a beautiful student campus – the Universiade village, which will be turned into the best university campus in Russia. It will become the most modern, the most convenient for students and teachers. It will house dozens of research laboratories and become a place where students from all over Russia and abroad will be receiving the best education. And, definitely, the sport facilities built during the preparations for the Universiade will be used by the student sport teams, which will improve the athletic and educational performance of our students’, said the Rector.

Koksharov also stressed that the teachers of UrFU are ready to contribute to the development of modern methods for the rehabilitation of athletes, logistics and security solutions and information support.

It’s the second time Russia is hosting the Summer Universiade. Last time the competitions took place in Kazan in 2013. Earlier this year, the city of Krasnoyarsk hosted the Winter Universiade.