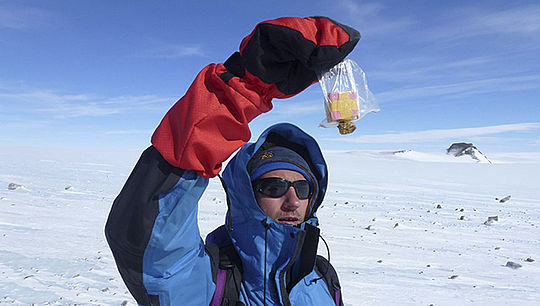 Photo from the personal archive

The first Russian meteorite expedition of Ural Federal University is returning home from Antarctic. The scientists are carrying home two meteorites and some of the collected stones bearing structural resemblance to meteorites.

The rest of the samples, as well as cubes of blue ice had been packaged and are waiting to be shipped to Ekaterinburg through St.Petersburg in April. The blue ice will be studied by the scientists of St. Petersburg Nuclear Physics Institute, Ural Federal University, and their French colleagues.

The six expedition members: Vitaliy Lazo, Mikhail Larionov, Sergey Malagamba, Ruslan Kolunin, Aleksander Pastukhovich and Andrey Korolyov carried out successful search work in the region of the Lomonosov Mountains at the South Pole. They collected over 300 samples, two of which were identified as meteorites right in the field. The other samples which resemble meteorites are yet to be studied and classified by the team of scientists led by Professor Victor Grokhovsky in the laboratories of Research and Educational Centre “Nanotech UrFU”.

Now the fieldwork is already over, and the meteorite expedition has already departed to Cape Town. They are going to arrive to Ekaterinburg on January 16.

UrFU meteorite expedition to Antarctic took place in the framework of the 61st Russian Antarctic Expedition. The author of the expedition project is UrFU professor Viktor Grokhovsky.

UrFU Antarctic Meteorite Expedition has been the first scientific project in the history of modern Russia aimed at search of meteoritic matter on the southernmost continent.  It became possible thanks to the participation of the university in the “Project 5-100”. The budget of the expedition is estimated at about 12.8 million rubles, most of the sum being provided by Ural Federal University. Thanks to the efforts of the UrFU Students’ Union, 500 thousand rubles were collected by means of crowdfunding, some part was invested by sponsors. For example, Ekaterinburg Engineering Company Plana invested 1 million rubles. The clothes for the members of the expedition were prepared by the local company Discovery, while the food supply was provided by NL International.