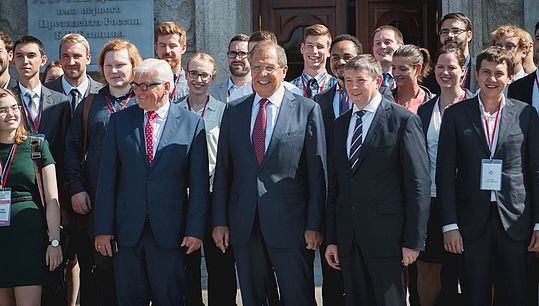 “It’s a great pleasure to be opening the second German-Russian summer school on power engineering, this time in Ekaterinburg. The first one was opened by Mr. Steinmeier and me in Berlin a year ago. This is a good example of collaboration between the two universities: Ural Federal University and Technical University of Berlin”, notes UrFU Rector Victor Koksharov.

According to Mr. Koksharov, despite the difficult political situation, the collaboration between Russia and Germany in the areas of education and science is developing dynamically, which gives hope for overcoming the arising political difficulties as well.

“I am happy to be back in Ekaterinburg for the sixth time already. Last time, I was invited to read a lecture at one of the most prestigious Russian universities, UrFU. I was talking about politics, collaboration, relations and connections between the people of the two countries”, says Frank-Walter Steinmeier. The title of Honorable Doctor of Ural Federal University is a really big award for me”.

The Head of the Ministry of Foreign Affairs of Germany also noted that, despite the issues existing now between Russia and Germany, it is necessary to seek possibilities for a dialogue. And one of such possibilities is the Summer School at UrFU.

“In Europe, we see growing recognition of the fact that there are no other alternatives but to normalize the relations and resume the existing formats of collaboration”, says Sergei Lavrov. We receive such signals not only from representatives of social, humanitarian, business circles, regular citizens, but also from many politicians, who realize that cessation of the Russia-NATO Council work, freezing of all the key mechanisms of interaction between Russia and EU was a mistake, including, by the way, freezing of the EU-Russia Energy Dialogue, which you are developing right now. I actively welcome it. You are giving an example to the grown-ups, because the youth is always looking into the future. On our part, we assume that one should restore the connections in a full-scale, qualitative way and not fragmentarily".

In the course of the School, which is taking place from 15 to 26 August 2016 at Ural Federal University, its participants will be looking for innovational and energy efficient solutions, as well as establishing new scientific grounds for cooperation between Russia and Germany.