The forum of researchers from Brazil, Russia, India, China and South Africa has come to the end 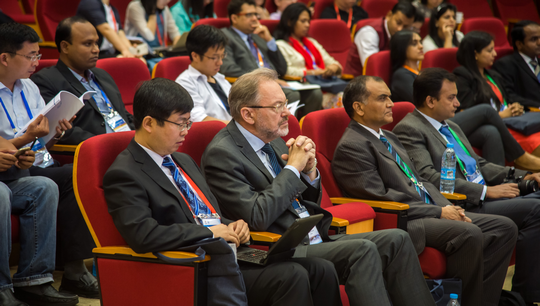 "The number of joint publications with scientists from the BRICS countries is growing rapidly; China and India are among the ten countries," said Vladimir Kruzhaev, UrFU Vice-rector for Science. “At the forum, UrFU delegation had an excellent opportunity to present our university and tell about the main directions of science development and examples of interaction between our scientists and researchers from universities and research institutes of the BRICS countries."

Vladimir Kruzhaev also noted that UrFU is dynamically developing scientific research in cooperation with colleagues from the Association of Sino-Russian Technical Universities. The university has already signed agreements with nine Chinese universities, members of this association, and with some of them, the agreements include specific scientific research between laboratories and university institutes.

The forum was held in four main areas: Energy, Materials, Biotechnology and Interdiscipline session. The largest number of reports at the forum was devoted to biotechnology; South Africa, Brazil and India were focusing on this direction. In all three countries, there is an interest in epidemiology and vaccines, especially in technologies that can respond quickly to newly emerging diseases, such as Zika virus. Several reports were also devoted to the study of HIV. Delegates from India focused on plant biotechnology, and colleagues from China presented a wide range of genomic studies. Several reports from different countries were explicitly or implicitly devoted to the organization of the work of clinics, the health system or the introduction of innovations in medicine.

The key objective of the forum was to establish contacts with young colleagues in order to organize interaction and conduct joint research, possibly with subsequent publication of the results or presentation at international conferences. Vladimir Kruzhaev notes that young scientists of UrFU Sergei Zvonarev, Dmitry Chezganov and Konstantin Ushenin managed to establish several promising contacts. The scientists hope it will eventually lead to real joint research and publications.