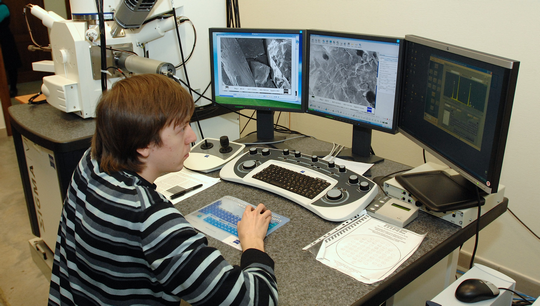 The scientists of Ural Federal University, who studied fragments of meteorites from Iran and Antarctica under the direction of Professor Victor Grokhovsky came to the conclusion, that even in the driest regions of the planet, there are traces of water and meteorite rock interaction.

The results of the research are published in the article "On Some Features of Meteorites from Hot and Cold Deserts" by Grokhovsky and Grigory Yakovlev, an employee of the Extra Terra Consortium Laboratory. The article was published in the collection of materials of the 80th annual meeting of the meteorite community.

The search for fragments of meteorites conducted by UrFU scientists both in the cold Antarctic and hot Iranian deserts was successful.

"Many scientists are interested in original material, but weathering begins with the first seconds the space matter reach the Earth," emphasizes Yakovlev. "Nevertheless, there are places on Earth for collecting meteorites with very small parameters of surface changes: for this purpose, UrFU meteorite expedition visited the Lomonosov Mountains in Antarctica and the Iranian desert Dasht-e Lut".

Now the scientists of UrFU laboratory are working on the classification of the samples.

According to the reports of the search group, many Antarctic samples, both meteorites and terrestrial rocks, were found in the pits. Apparently, the heating of the rock by the sun led to the melting of the adjacent sections of the ice. The study of relatively large Iranian meteorites showed the difference between the melting crust in the upper and lower parts of the debris. The researchers believe that possible cause of this phenomenon are day and night cycles of condensation.

Both cases indicate an uneven distribution of the factors of earth weathering. Such an impact should be taken into account when determining the level of weathering, the scientists believe.

The meeting of the meteorite society is taking place these days in Santa Fe in the south of the USA. Employees of the university present 25 reports on the aspects of studying extraterrestrial matter, including the properties of the Chelyabinsk meteorite, as well as meteorites brought from expeditions to Antarctica and Iran.

On some features of meteorites from hot and cold deserts