UrFU Meteorite Expedition Finds about 20kg of Samples in Chile

Scientists are planning to install Bolide Network in Antofagasta 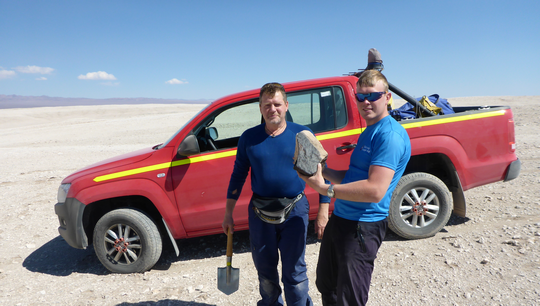 The expedition took place on the still plateau. According to scientists, the discovered samples preserved their original appearance. Photo from the archive of the expedition

The participants of UrFU Meteorite Expedition went to Chile and brought from the journey about 20kg of samples for examination, which they found in the Atacama Desert in the north of the country.

“We came back to Ekaterinburg with 18 meteorites. Some of the discovered samples we gave to the Catholic University of the North in Antofagasta”, said the leader of the expedition Alexander Pastuhovich.

The expedition took place on a still plateau. As the scientists noted, the discovered samples preserved their original appearance.

“Among the findings there were some pieces from the fresh fall. Generally those were chondrites but we had one achondrite as well which was part of a bigger asteroid. The meteorites are about 4.5 billion years old”, says Mikhail Larionov, participant of the expedition and associate professor at the Institute of Physics and Technology, UrFU.

Organizers shared their plans to cooperate with the Catholic University of the North, especially among astronomers and their discussion about the installation of the Bolide Network for meteorites observation.

The UrFU meteorite expedition lasted two and a half weeks.

Team of Ural Federal University has been meteorites-“hunting” numerous times. The first Russian Meteorite Expedition to the Antarctic was organized in 2015-2016. That time the participants brought more than 300 samples of meteorites and cubes of blue ice. In 2017, they gathered about 12kg of samples in Iran, the heaviest one weighing 10kg.