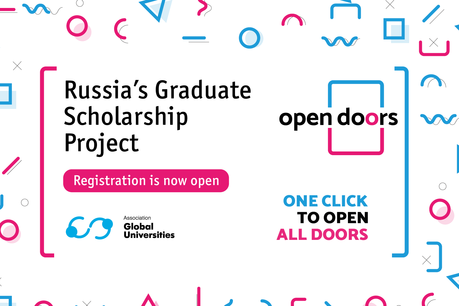 An intellectual competition for prospective Master’s students from all over the world, the Open Doors: Russian Scholarship Project, is on now! Participants compete for an opportunity to study tuition-free in one of Russia’s leading universities. The contest is supported by the Ministry of Education and Science of the Russian Federation and is organized by the “Global Universities” Association.

The competition is open to citizens of all countries other than Russia, stateless citizens, and Russian citizens who are permanent residents of other countries. It’s mandatory to have a Bachelor’s degree or be receiving one in 2018. It’s not necessary to come to Russia to participate. All stages of the contest take place online.

It’s possible to apply for several subject areas at the same time. Winners will be accepted without entrance exams before the general admissions process and start their education in the academic year 2018/2019.

Winners can choose a program taught in Russian or English. In case the programs they are interested in are taught in Russian only, the winning student can start with a 1-year intensive foundation course of Russian as a foreign language.

Stages of the Competition

Registration opens on November 15th! Portfolios can be uploaded starting on December 1.

March 5 - March 15, 2018
Participation is open to winners of the portfolio contest.

How are the Winners Determined?

Participants who have successfully passed the two rounds and whose overall score gets them into the top 5% of the ranked list of participants are considered Winners.

Participants who have successfully passed the two rounds and whose overall score gets them into the top 25% of the ranked list of participants are considered Award winners. Winners of the contest can select any program track within a subject of their choice, and then apply to one or several Russian universities that have educational programs corresponding with the track that interests them.

For the applicants willing to study in Ekaterinburg either in Russian or English, Ural Federal University offers a wide range of Master’s programs in all four areas of study, an intensive course of Russian as a foreign language (if necessary), alongside with wide research and international opportunities and bright social and cultural life.