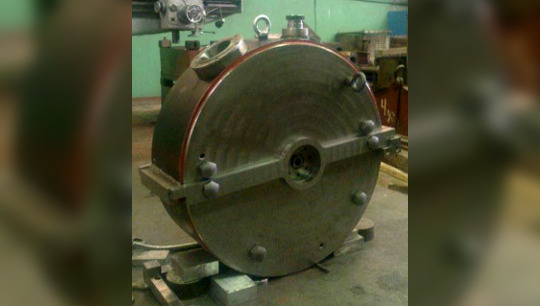 The invention can be used at chemical, pharmaceutical, or metallurgical plants. Photo provided by the Governor’s Department of Information Policy

Engineers of Ural Power Engineering Institute (UrFU) presented the world’s smallest steam turbine developed in collaboration with the region’s industrial sector. It is half a meter in diameter, has power of 30kW, and works without fuel oil, which brings the risk of combustion to a minimum, while the absence of a gearbox helps reduce the noise levels.

According to Sergey Sarapulov, Director of UrFU Power Engineering Institute, in the future the PTM-30 turbine will be able to replace imported turbines widely used in industry today and reduce the negative impact on the environment, provide villages with electricity and bring warmth to the shift workers in the Far North. He also noted that the invention will make it possible to independently generate electricity, not only in enterprises, but also in residential buildings:

"To heat an average house with an area of 300 square meters, you need about 15-20 kilowatts of electric power - in fact, it's either one big house or two small ones."

The turbine can also be used in chemical, pharmaceutical, metallurgical plants – its introduction will make it possible to utilize the excess steam with economic benefits.

The PTM-30 turbine is a result of five-year-long joint work of Ural Power Engineering Institute, UralVagonZavod and ELTA electro-technological alliance.