The international research system Dimensions was launched on January 15 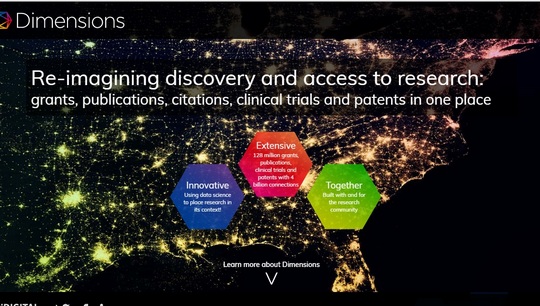 The platform was created by the Russian company Digital Science in cooperation with six of its portfolio companies. Photo: Dimensions.ai

Staff of UrFU Laboratory of Scientometrics took part in the creation of the global research platform Dimensions, which was launched on January 15.

‘We got an early access to the content of the platform and tested the system. We gave our feedback on what needs to be improved with regard to the Russian specifics’, explains Mark Akoev, head of UrFU Laboratory of Scientometrics.

This platform is an aggregator of scientific information on grants, publications and patents. Elsevier, Web of Science and Scopus are its analogues. But, unlike them, Dimensions unites several hundred of the world's largest scientific funds and has a database on scientific grants awarded by government and non-government funds in the amount of more than 1.2 trillion dollars.

‘We plan to subscribe to this resource if we get financing. Its value for our scientists lies in the fact that it shows what scientific directions are currently being financed,’ says Mark Akoev. – ‘Publications on these topics can be expected in a few years, but we’ll have a way to see what’s in demand by scientific funds right now. In this case, our scientists will have the opportunity to adjust their research’.

Dimensions provides free access to more than 860 million citations and 9 million articles from open sources, 124 million documents, 3.6 million grants, 86 million articles and books and 34 million patents. Some functions, like the access to analytics and additional data sets, are provided for a fee.

According to Igor Osipov, CEO of Digital Science Russia (creator of Dimensions), this is a system with a large data array that allows its users to make accurate and verifiable assessments of what scientific fields are developing and how they are financed.

‘We’ve been focusing on publications for many years, but they appear only after the project is finished. But the period from the start of the project’s assessment and funding to the first publications can take three to five years’, explained Igor Osipov to "Indicator".

The company plans to cover the maximum number of publications, including those in national languages.

The platform was created by the Russian company Digital Science in cooperation with six of its portfolio companies and with the expert participation of more than hundreds of universities and research funds from around the world. Russian partners of the project include RSF, Foundation for Assistance to Small Innovative Enterprises (FASIE), Russian Venture Company, Russian National Public Library for Science and Technology and several universities, such as UrFU, RANEPA, Saint Petersburg State University of Information Technologies, Mechanics and Optics, MIPT, SPbSU, and Southern, Kazan and Far Eastern Federal Universities.