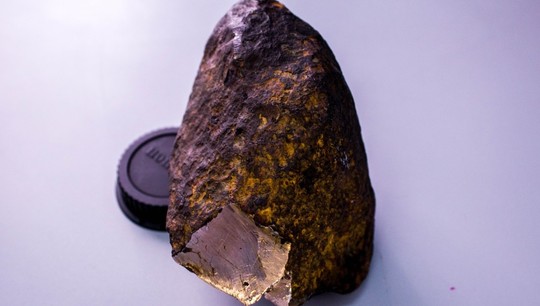 Uakit meteorite was found in the summer of 2016 when searching for gold. Photo: webmineral.ru

A group of scientists from Ural Federal University, together with colleagues from Novosibirsk and Ulan-Ude, discovered a new mineral of uakitite in the iron meteorite Uakit, found in Buryatia in the summer of 2016. The researchers made a report today at the congress of the meteorite society, which is taking place in Moscow.

‘To prove the discovery of a new mineral, it is necessary to obtain data on its crystal structure,’ explains Viktor Grokhovsky, UrFU professor. ‘Since the size of uakitite is very small, about 1-5 microns, it was impossible to solve this problem by the traditional method of X-ray analysis. The structure was studied on the equipment of UrFU scientific and educational center "Nanomaterials and Nanotechnologies" using electron diffraction.’

Professor Grokhovsky adds that the mineral consists of vanadium nitride and is already registered. The participants of the Annual Meeting of Meteoritic Society were the first to hear about this discovery.