The key lines of work of the center are manufacturing technology, energetics and new materials 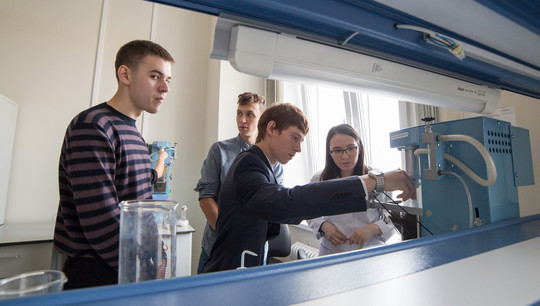 The project implies the cooperation between UrFU, Research and Educational Centers all over the globe, the Ural Branch of Russian Academy of Sciences’ academic institutions, and the leading regional and international corporations. Photo: Ilya Safarov

The concept of establishing an “Advanced Manufacturing Technologies” Research and Educational Center (REC) proposed by the Ural Federal University, suits the interests of Sverdlovsk region’s research and manufacturing potential development. This is the conclusion reached by the Sverdlovsk Regional Union of Manufacturers and Entrepreneurs Committee members concerning the development of vocational education and labor resources at the meeting held in UrFU recently.

‘The project involves the cooperation between our university, world research and educational centers, the Ural Branch of Russian Academy of Sciences’ academic institutions, and the leading regional and international corporations with the support of federal and regional authorities,’ the Ural Federal University Rector Victor Koksharov says. ‘The key lines of work of the new center will be modern production technologies, energetics and new materials.’

Mind you, the elaboration of the project on creating a world-class research and educational, as well as technological center in Sverdlovsk region is carried out in accordance with a presidential decree on national goals and strategic objectives for the development of the country. It is expected that the competition in the framework of the national project "Science" will be announced on April 1, and the results will be unveiled in July 2019.

Victor Koksharov also noted that the “Advanced Manufacturing Technologies” center will be focused on creating new technologies and products, engaging businesses in technological leadership projects and attracting new financial and human resources to the region.

The Development of Vocational Education and Labor Resources Committee members decided to advise the governor of the Sverdlovsk region to endorse the idea of implementing a program to support the development of cooperation between Russian higher education institutions and organizations implementing complex projects to create high-tech production.

Among the recommendations to the governor there are suggestions to instruct the regional government to work out mechanisms for allocating subsidies to manufacturing enterprises based on a competition. These subsidies will be intended for financing complex high-tech production projects, carried out jointly by manufacturing enterprises and higher educational institutions or scientific institutions as part of a scientific education center (REC).

In addition, the members of the Sverdlovsk Regional Union of Manufacturers and Entrepreneurs Committee will prepare ideas on the possible directions for the implementation of complex projects of the high-tech production organization and submit them to UrFU.