The device developed at UrFU is simple, compact and inexpensive 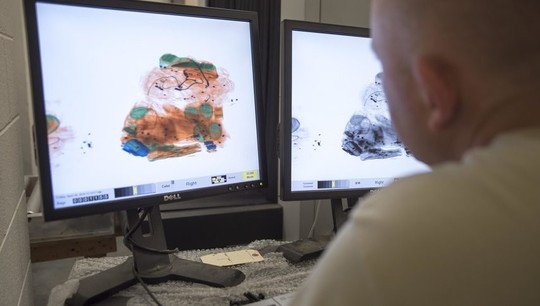 Scientists of the Ural Branch of the Russian Academy of Sciences’ Postovsky Institute of Organic Synthesis and the Ural Federal University have synthesized a series of new fluorophores and tested them on an explosives detection device. An article about the work done by the researchers has been published in the international scientific journal “Dyes and Pigments”.

‘Fluorophores are substances (as a rule, powders) of different colors, which glow when exposed to ultraviolet light,’ Egor Verbitskiy, a senior researcher at the laboratory of heterocyclic compounds of the Ural Branch of the Russian Academy of Sciences’ Postovsky Institute of Organic Synthesis, explains. ‘Interacting with other objects, substances change either the color or the intensity of the glow.’

Thus, fluorophores can serve as indicators of the presence of cancer cells in the body or the soil and groundwater being polluted by hazardous environmental toxicants. A group of scientists led by academician Valery Charushin uses fluorophores in an explosives detection device.

A device working on the principles of a vacuum-cleaner, pumping air through a sensor element (a piece of nonwoven P.P. fabric processed with a fluorophore solution) was developed by Konstantin Khokhlov, Associate Professor of the UrFU Department of Experimental Physics, and Candidate of Technical Sciences Anna Baranova. The "decay" of the sensor’s glow upon irradiation indicates the presence of vapors of an explosive substance containing nitros, for example, trinitrotoluene (TNT) and its derivatives. The concentration of explosives can be roughly estimated by observing the decay rate. Sensors created in Ekaterinburg have the ability to recover in a few hours almost completely, which means they can be used many times.

‘It takes several seconds from the moment the device is turned to the moment it is ready to operate,’ Konstantin Khokhlov notes. ‘Our device is distinguished by the simplicity of operation, small size and weight, low price. In addition, since our device is not for measurement, but for detection, it is not required to obtain metrological certification.’

The scientists emphasize that the device is able to cope with non-trivial tasks.

‘Even if you wash your hands thoroughly, with soap, the device will detect traces of explosives on them. Another example is, imagine the landfill where a multitude of live shells has detonated, but one or two have not. The device will “see” them even in such foul environment,’ Anna Baranova adds.

The system was successfully tested during preparation for the 2018 FIFA World Cup games in Ekaterinburg and turned out to be in demand with the military, transport police, airports, and instrument manufacturing companies.

‘Currently we continue to synthesize new fluorophores, ensure that the sensors are more durable and sensitive to the widest possible range of explosives, that the technology is even cheaper, and the device is more practical and more reliable. Plus, we want to make sure the device works smoothly not only in indoor conditions, but also in the cold, in the snow and in the rain,’ Baranova says.

The studies of Ekaterinburg scientists are conducted thanks to grants from the Russian Foundation for Fundamental Research and the Russian Science Foundation.