In a year, the fragments will be returned to the Institute of Astronomy and Geophysics of the Mongolian Academy of Sciences 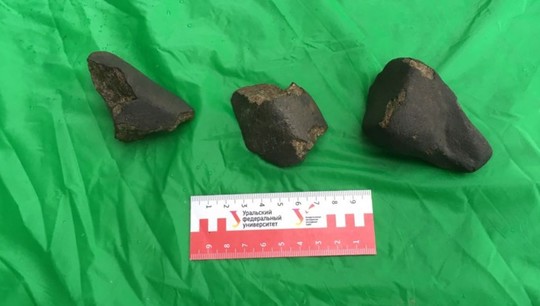 UrFU expedition conducted a search in the Mongolian part of the Gobi desert. Photo: archive of the UrFU meteorite expedition

Fragments of alleged meteorites, which were found in August/September this year in the Mongolian part of the Gobi desert by UrFU scientists, arrived at the Ural Federal University.

According to the scientists, the items are one separate meteorite and four fragments of another meteorite. Since meteorites are recognized as national treasures in Mongolia, scientists from the Institute of Astronomy and Geophysics of the Mongolian Academy of Sciences sent them to Ekaterinburg for research just for a year. Then the alleged meteorites will return for storage to the country where they were found.

‘First, we will cut off a piece of the meteorite, then we will prepare a polished section (a smooth, almost mirror-like surface), then we will study it under microscopes. We will determine the chemical composition of the fragments and, consequently, the type and mineral phases. Then we will submit the meteorite to be registered in the meteorite community, so that it takes its place in the catalog,’ Mikhail Larionov, the expedition member, Associate Professor at the UrFU Institute of Physics and Technology explained.

The researchers can tell just by looking at the samples, that the found item belongs to stone meteorites, but with varying degrees of magnetic properties. Larionov also added that it usually takes two months to research and register the samples.

‘The desert is a nice place for accumulation and collection of meteorites. They are preserved better there, because there is no moisture and flora to gradually cover them, there is no soil. They fall to earth and remain lying in the desert intact for millions of years,’ the researcher says.

Mind you, the Mongolian meteorite expedition took place from August 21 to September 10. The search team, consisting of scientists from UrFU and the Institute of Astronomy and Geophysics of the Mongolian Academy of Sciences, managed to collect one and a half kilograms of extraterrestrial matter. The largest sample weighs about 800 grams.