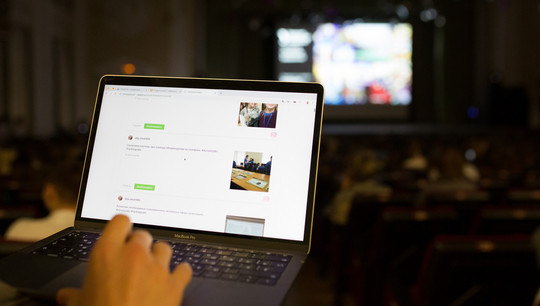 Researchers plan to consider the mediatization of Orthodox Christianity as a two-way process. Photo: Ilya Safarov

Young scientists from Ural Federal University and Higher School of Economics are trying to understand whether the Internet has influenced Orthodox Christianity, and how the social institution and social practices could have been transformed in the age of social media. The project “Social media as a factor in the transformation of Orthodoxy in modern Russia” received support from the Russian Foundation for Basic Research for 2019–2021.

‘Media has become one of the drivers for change in modern society. The Internet has transformed the existing hierarchies, giving voice to the silent majority. On the other hand, religions are based on tradition, transfer of knowledge through books, rituals and various forms of communication face to face. And it is interesting to see whether social media have changed Orthodox traditions or not,’ Ekaterina Grishaeva, the project manager, Associate Professor at the Department of Social Philosophy of UrFU, explains.

The researchers' plans are to look at the mediatization of Orthodox Christianity as a two-way process: how the communicative possibilities of the Internet environment transform Orthodox ideologies, practices and hierarchy, and the Orthodox community adapts the Internet to fit its needs. To do so, they study the blogs of people who form the image of Orthodoxy on YouTube, VKontakte, Instagram, Facebook; analyze the popular video blogs of priests Andrey Tkachev, Dmitry Smirnov, Evgeny Popichenko, the social networks of the congregations. The interviews with churchgoers are part of the plan as well.

The researchers claim that nowadays religious rituals are performed via the Internet: one can watch a video of readings of sacred texts online, livestreams of worship services, there is an opportunity to order occasional religious services online, etc. Religious leaders use social media as a platform for missionary work.

‘For example, in Ekaterinburg, 21 out of 53 congregations have pages in social networks,’ Ekaterina Grishaeva says. ‘The growing social media presence of Orthodoxy attracted the attention of the Moscow Patriarchate of the Russian Orthodox Church. In August 2018, the Synodal Department for Church Relations with Society and Mass Media published a document "Video blogs of the Russian Orthodox Church priests: guidelines," designed to regulate the actions of blogger priests.’

It is expected that in the first year of the grant, the young scientists will work out the research methodology, determine the specifics of Orthodox communication in social media, analyze the structure of Orthodox rituals, and conduct interviews with priests and members of Orthodox communities. The results will be presented in scientific articles.