Biologists Seeking to Determine Why Body Gets Rid of DNA
More

Biologists Seeking to Determine Why Body Gets Rid of DNA 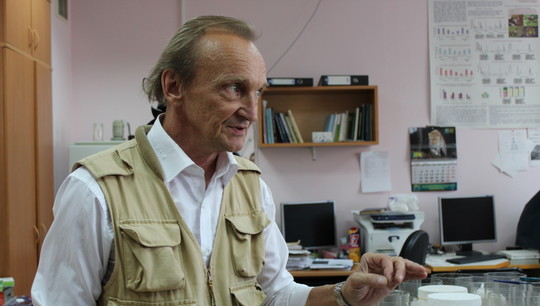 The research will help determine why a body gets rid of genes. Photo: Polina Pogrebitskaya

Russian biologists, together with their colleagues from Japan, seek to determine which mechanisms trigger the elimination of the genome during the hybridization of closely related species. In other words, they are trying to understand why at some point a body recognizes the DNA of one of the parents as foreign and gets rid of it. The scientists have received a grant by the Russian Foundation for Basic Research to conduct the study.

‘Foreign genes can enter the body in different ways. For example, they can be brought in by viruses. There is nothing dangerous in this, because in the course of evolution a system has been developed, that recognizes these fragments and either marks them as “unreadable” or deletes them. This process of selective destruction is what we call the elimination of the genome — a mechanism common to all organisms,’ the project supervisor Vladimir Vershinin, Professor of the Department of Biodiversity and Bioecology of the UrFU Institute of Natural Sciences and Mathematics, explains. ‘Sometimes foreign fragments bring new biochemical capabilities that the body lacked. If the gene that was brought in works better, it can replace the native one. This is a natural process, which is then checked by selection through many years and generations.’

The scientists try to determine the trigger mechanism of genome elimination in frogs. The pool frogs of the Nizhny Novgorod region became subject to the experiments. Their genome is often eliminated during gametogenesis of hybrids.

Hybridogenesis in frogs was discovered in 1968, but the mechanism and cause of elimination has not yet been established.

‘All data in domestic publications on this issue were obtained in the course of the research of green frogs from the Kharkiv region. However, in the populations of this region polyploid forms are found among hybrids, which makes the task more interesting, but also complicates it,’ the biologist says. ‘Our population system is more convenient as a model, because it is simpler. There are no polyploid forms – triploids and tetraploids. However, despite the simplicity, the mechanism of genome elimination is universal, since it is crucial for the survival and reproduction of all species.’

The plans of the researchers also included the study of Japanese brown frogs, but eventually this idea was dropped.

‘As it turned out, the rate of genome elimination in selected species of brown frogs is very low. In addition, it turned out that there is no point in studying methylation, which is not related to the elimination of the genome. For this reason, our partners have adjusted the plans,’ the biologist adds.

However, experiments on green frogs require a lot of time as well. To continue the work, it is necessary to intercross different species, get hybrids, wait until they reach sexual maturity and then observe their offspring.

‘We can breed offspring in one season. But a frog must grow for three years to reach sexual maturity,’ Prof. Vershinin explains. ‘We’d started conducting research earlier, even before we received the grant, and I think that at the end of the grant our cooperation with Japanese colleagues will continue.’

The frogs are studied using unique equipment at the Amphibian Research Center of Hiroshima University. This is the only institution in the world with many years of experience, technical capabilities and the necessary tools for breeding and rearing frogs over several generations artificially.

The scientists have not yet disclosed the results of this year’s research and the new working hypotheses. It is scheduled that they will be presented at a conference to be held at UrFU in September.

‘Since we are currently in the working process, I would like to not disclose the results that have not received final confirmation,’ Vladimir Vershinin explains. ‘I can only say that colleagues in Japan are doing filigree work on the highest level. The data we receive surprises us each time, because nothing is as simple as it may seem at a first glance.’