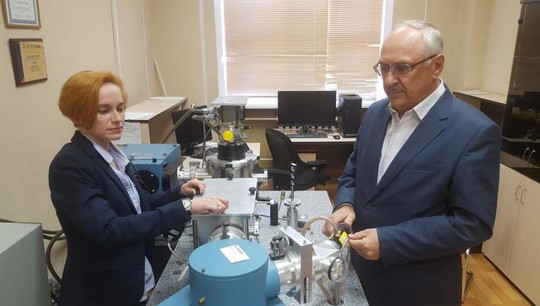 UrFU scientists are carrying out basic scientific research, which will make it possible to make a breakthrough in the field of solar energy in the future. This will be possible thanks to the creation of new materials with desired properties for devices that convert ultraviolet and infrared radiation.

The research is conducted by a team at the UrFU “Physics of Functional Materials of Carbon Micro- and Optoelectronics” Laboratory under the supervision of Anatoly Zatsepin. According to the scientist, the research will allow to change the possibilities of solar energy drastically. This will be achieved by using materials based on rare earth elements. Deliberate modification of their optical properties improves the efficiency of solar energy conversion significantly due to a range of fundamentally new effects discovered.

‘We found that the intrinsic lattice defects of Gd2O3 nanoparticles (irregular cations with impaired oxygen coordination) can absorb UV radiation and transfer excitation energy to luminescent in the visible spectrum REE [rare earth elements] ions effectively,’ Anatoly Zatsepin explains. ‘Based on the study of patterns and the establishment of the energy transport mechanism, we have implemented a new channel for the conversion of solar radiation, which is characterized by increased quantum efficiency. Among the latest results, the effect of the so-called “giant phonon softening” was discovered, which manifests itself with the introduction of small additions of rare-earth ions into the structure of photonic nanoparticles.’

This is exactly why there is an additional opportunity to reduce nonradiative losses and increase the overall efficiency of UV radiation conversion.

Based on the data obtained, a prototype of a modified solar cell containing a conversion layer of rare-earth oxide nanoparticles was developed. This design of the solar cell will allow for the use of an additional part of the solar spectrum in the UV, which, according to preliminary data, will provide an increase in conversion efficiency by more than 20%.

‘Today, the efficiency of industrial silicon solar cells doesn’t exceed 15%, which significantly limits their widespread use,’ Anatoly Zatsepin notes. ‘Our research shows that this indicator can be increased to 25–30%. Some experiments suggest that, theoretically, this indicator can be even bigger, however, this requires additional detailed study. Further development of research demonstrates clear prospects for a global breakthrough in the field of alternative energy and the creation of highly efficient new-generation solar cells. It is hoped that this will lead to the solar energy increasing its market share more and more each year, driving out traditional forms of energy.’

The research results were highly appreciated by the international scientific community. At the prestigious congress on contemporary materials held in Miami (USA) Anatoly Zatsepin was awarded a medal and a certificate. Yulia Kuznetsova, junior research fellow working under Mr. Zatsepin’s guidance, is the only Russian to receive the European Young Scientist Award for outstanding results and their scientific significance at the congress of the European Society for Materials Research (EMRS-2018) in Strasbourg (France).

The research team behind the project, led by Anatoly Zatsepin, will consist of the staff of the Advanced Industrial Technologies research and education center being created in the Ural region as part of the national project “Science”.