Confucious Institute of UrFU has hosted 30 events in 2019, gets the award from the Minister of Education of China 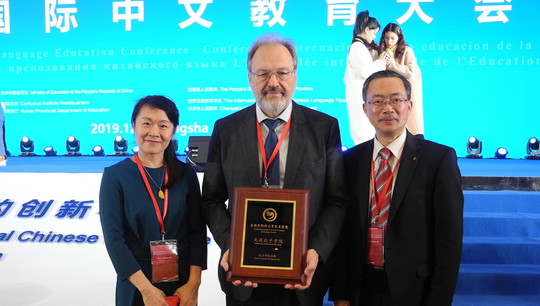 "We became the best this year all due to the realization of our potential for cooperation. The most active partner we have is the Consulate General of PRC in Yekaterinburg, especially Consul for Education Ms. Zhao Yan. With the assistance and support from Ms. Yan we could arrange and host the regional stage of 'Chinese Language Is a Bridge' competition. For the next year's, we are looking forward to become a platform for All-Russian final stage for students", — says Maria Guzikova, Director at the UrFU Confucious Institute.

Apart from teaching the language, in 2019 the Confucius Institute hosted 30 different events, e.g. the visit and concert of the famous guqing and flute master players Li Fengyu and Wang Jiangxin; and participation in the World Cities Day under auspices of the UN-Habitat.

In addition to that, personal award for major contribution to the development of the Confucius Institute of Ural Federal University went to Cao Liang, Chinese teacher, who has been working at UrFU as chair assistant and foreign volunteering teacher since 2015.

Also on December 10, in the city of Changsha (PRC) the international conference on the Chinese language studies ended. Every year this conference unites all the Confucius Institute branches of the Institute's global network.

Confucius Institutes are globally spread institutions popularizing the Chinese language and culture, created by the Ministry of Education of China within the bilateral agreement framework with foreign educational institutions. The first Confucius Institute in the Urals and the 16th in Russia was inaugurated in Yekaterinburg on October 28, 2008 with the support of the UrFU's partner university in Guangzhou - Guangdong University of Foreign Languages ​​and Foreign Trade.