Academic Mobility Is a Great Launch Pad for Young Scientists 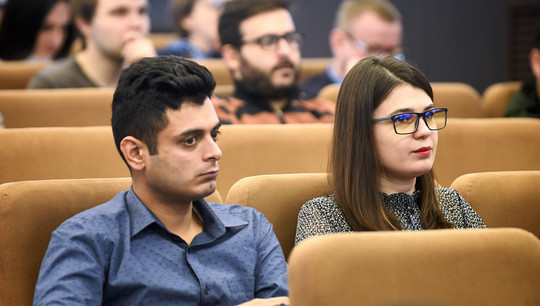 Supporting the youth science continues to be a top priority of the Ural Federal University. Rector Koksharov alongside First Vice-Rector for Economics and Development Daniil Sandler, and Vice-Rector for International Relations Sergey Kurochkin held a seminar for young scientists of UrFU.

Students of all years, PhD candidates young teachers had a discussion about the ways of promoting the university's young experts and leaders. Serving as real-life examples, successful world-famous scientists from UrFU - chemist Pr. Dr. Grigory Zyryanov, mathematician Pr. Dr. Vladimir Shur and Chief Researcher from the Ural Branch of the Russian Academy of Sciences Dr. Sergey Streltsov - also took part in the seminar and shared some of their life experiences.

Rector Victor Koksharov outlined that the university calls for young scientists to work hard and strive for breakthroughs in order to get published in the most prestigious journals. UrFU asissts in the active promotion on the global scale and challenges itself to become a world-class university. The university is actively promoting itself in world rankings and over the last three years alone it has gone up 286 positions in the QS World Universities ranking, occupying 364th place in the world, as well as entering four of the five broad subject QS rankings. However, Rector said the university will never stop developing this success.

“Implementing a 5-100 program to increase our competitiveness, we face limitations - so far only 28% of faculty personnel regularly publish their papers in journals indexed in international databases, while 30% do not get published at all. As a consequence to that, the university does not get the visibility in the world that it could have. At foreign internships and conferences, we often see the same surnames from year to year. We would like as many of our young scientists as possible to travel and establish cooperation with colleagues from other countries,” said Victor Koksharov.

One of the most important tools for establishing scientific contacts is the use of international academic mobility programs. Today, Ural Federal University has more than 160 bilateral agreements on academic mobility with universities from 40 countries: from giving lectures, seminars, doing research, to continuing education programs, attending summer and winter schools, or scientific conferences, symposia, and internships.

“There are scholarship programs in the framework of bilateral interstate agreements for citizens of the Russian Federation - for Master's students and the academia,” said Evgenia Saburova. - The organizer of the competition is the Department of International Cooperation of the Ministry of Education and Science of Russia. You can also apply for scholarships of the President of the Russian Federation for students abroad. Of course, there is a competition everywhere, but there are always chances to win in them and you just need to try once.”

The most important requirement for a potential participant in academic mobility programs is knowledge of the English language. Almost all speakers during the seminar focused on this. In particular, Vladimir Shur emphasized that it is really real good to learn a language in a few months in appropriate conditions, and motivation is no less important.

“People often get overloaded with their English classes - much more than they need to communicate. In addition, many people have a psychological barrier in their heads, because they learn the language just to pass the exam,” added Vladimir Shur. - Of course, it is impossible to learn a language in a week, though it’s possible to break the psychological barrier in just a few days. You can learn a language in a few months if you are surrounded daily by native speakers of that language. In Switzerland, almost everyone knows four foreign languages, regardless of thier education. Only in Russia this attitude is taken for something exceptional and complex. This is not true".

Those who wish to participate in foreign internships and conferences can contact the coordinators of the Center for International Student Mobility and Recruiting: Evgenia Saburova (e.s.saburova@urfu.ru) - for the western direction and Iona Aroyan (iona.aroian@urfu.ru) - for the eastern direction. In addition, you can independently apply to a foreign partner university.