Gerardo Penalver Portal - 'We Try to Improve our Bilateral Relations' 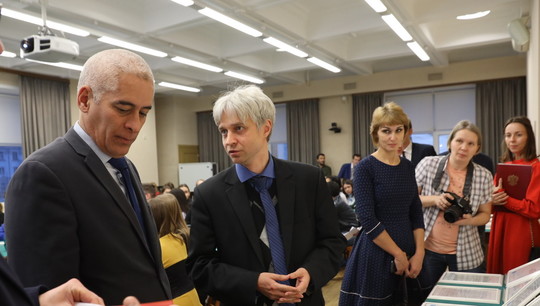 Ambassador Extraordinary and Plenipotentiary of the Republic of Cuba to the Russian Federation Gerardo Penalver Portal visited the Ural Federal University on December 19. The diplomat spoke about bilateral relations in the field of culture, education, economics and politics, which, in his opinion, are at the best level in 30 years.

Today, Russia is the second (after Spain) trade and economic partner of Cuba. Last year, Cuba imported $440 million worth of goods from the Russian Federation and exported to Russia worth of $10 mil. In 2019, imports amounted to $550 million, and exports - $30 million. Growth is also observed in the tourism sector.

“The tourism sector is developing as one of the main sectors of the Cuban economy. And Russia plays an important role here, because the tourist flow of Russian tourists is increasing. Last year it was 30%, this year it will also be 30%. Five years ago, Russia was in 15th place in terms of the number of tourists. Today, the Russian Federation ranks fourth after Canada, the USA and Germany. We think that in one to three years, Russia may take the second place,” explains Gerardo Penalver Portal.

Another area of ​​bilateral relations is culture. So, on the 500th anniversary of Havana, Russia made a gift and helped restore the dome and statue of the Republic in the Capitol.

“Now negotiations are underway to open a branch of the Russian Museum in Havana. This will provide an opportunity for the Cuban people to get acquainted with Russian art, ”the diplomat says. “Culture is the best form of diplomacy: through culture we create bonds and relationships that will be forever, because these are human relationships.”

During a meeting with the Rector, Gerardo Penalver Portal emphasized the success of the university in the field of science and education.

“In the energy, healthcare, transport, industry, humanitarian and several other areas, Cuba continues to consider Russia as one of its strategic partners,” said the ambassador. “Now about 300 Cuban students are studying in Russia at 24 universities in nine subjects of the federation.”

The guest emphasized that the two countries need to strengthen not only trade and economic relations, but also cooperation in the scientific and technical fields. The head of Ural Federal University accepted the invitation of the ambassador to participate in the Russian-Cuban forum of rectors and noted that interest in Latin American students is growing.

“We look forward to stronger ties with Cuban universities,” Koksharov said. “In addition, we plan to attract promising Cuban students, because now more than a hundred students from this region are studying with us.”

During the meeting, the rector and the ambassador also discussed the upcoming FISU Summer Universiade in Yekaterinburg in 2023 and the 100th anniversary, which the university will celebrate next October.