Grants were claimed by the projects in the fields of Materials Science, Energy, Physics, Chemistry and Management 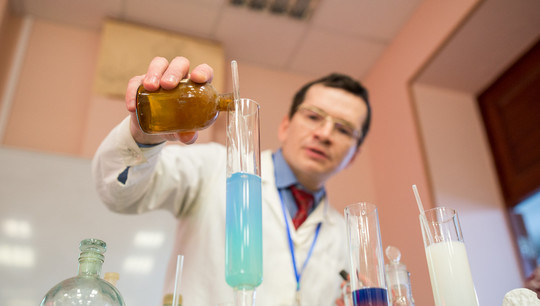 Scientists to receive from 600 thous. to 2.6 mil. rub. per year. Photo by Gleb Yeriomenko.

Ten young scientists from Ural Federal University won grants of the President of the Russian Federation in 2020. Russian state will provide financial support to the young Russian scholars. Researchers will develop a conformal antenna array, effective approaches to the directed design of polycyclic azaaromatic ensembles, determine the doping effects on the structure and properties of cathode materials, etc.

One of the projects is the development of permanent magnets with record-breaking characteristics based on nanocomposite alloys of the engineer of the Department of Magnetism and Magnetic Nanomaterials of the Institute of Natural Sciences and Mathematics Anton Bolyachkin.

“The study aims to develop and study the magnetic properties of nanocomposite alloys based on soft magnetic and hard magnetic phases. Such alloys have the prospect of use in creating energy-intensive permanent magnets, says Anton Bolyachkin. Following the growing demand for electric powered transport and power generation, the use of more efficient magnetic materials in electric motors and generators can lead to significant savings in natural resources, as well as to a reduction in environmental pollution.”

In total, 1,509 young candidates of sciences from all over Russia applied for 400 grants. In addition, grants will be given to two scientific schools under the guidance of Professor of the Department of Organic and Biomolecular Chemistry of the Institute of Chemistry and Technology Grigory Zyryanov and Professor of the Department of Sociology and Technology of State and Municipal Administration of Graduate School of Economics and Management Anna Bagirova. Zyryanov will study the synthesis of derivatives of azarylenes, azapyrenes and related structures and Bagirova will examine the Russian pro-analytical policy.

“We plan to study nitrogen-containing derivatives of polycyclic hydrocarbons - PAHs. On the one hand, PAHs are dangerous environmental pollutants - carcinogens and teratogens, and on the other hand, many PAHs, being structural derivatives of graphene, are valuable as promising components of molecular electronics, photovoltaics, and sensors,” explains Prof. Grigory Zyryanov.

The results of the project, according to the scientist, have extensive prospects for practical application.

“We intend to use a progressive 'green' methodology based on the direct С-Н-functionalization processes developed by the founder of our scientific school, academician Oleg Chupakhin,” says Grigory Zyryanov. - We expect that the initial aza-PAHs, as well as products of their further chemical modification, will exhibit unique photophysical properties, which will allow the use of these substances as promising phosphors. In addition, they will show interesting coordination properties with respect to biomolecules, for example, to certain enzymes and proteins, explosives, as well as to metal cations.”

The competition of leading scientific schools is held once every two years. Compared with the previous period, the number of applications increased by 10%. This year, 141 applications claimed 50 grants. The average competition was 2.6 applications for one grant.

Grants of the President of the Russian Federation are allocated for two years for research in 11 areas: mathematics and mechanics, physics and astronomy, chemistry, biology and life sciences, earth sciences, medicine, information and telecommunication systems and technologies, agricultural, technical and engineering, public and humanities.