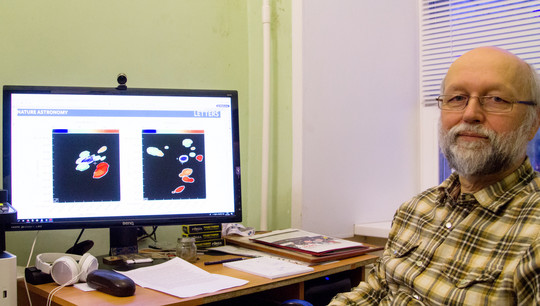 As Prof. A.M. Sobolev says, the bursts from the G358-MM1 was observed twice with a gap of 26 days. Photo: Anna Marinovich.

The international group of scientists, which includes a leading researcher at the Kourov Astronomical Observatory of Ural Federal University Andrei Sobolev, for the first time in history has been able to trace by masers and examine the subluminal propagation of a thermal radiation ‘heatwave’ emanating from an accreting high-mass protostar of the high-mass protostar G358-MM1. The object is eight times the mass of the sun; located at a distance of about 22,000 light years from Earth. The results are published in the Nature Astronomy journal .

“We observed changes in the evolution of the methanol masers emissions. In the course of observations, for the first time it was possible to measure the propagation speed of the reaction of a substance to a burst from the G358-MM1. It propagates to ≥4% of the speed of light. The substance in this object at this speed cannot move that fast. That is, it spreads radiation, - says Andrei Sobolev. - It was assumed that the radiation from the flare of a protostar should propagate at the speed of light. The measurements showed that it spreads 20 times slower."

Consequently, there is a lot of dense matter around a protostellar object that traps photons; and their multiple scattering occurs. Drawing an analogy, the photons born in our Sun behave the same way.

“This is a well-known event that many forget about: for a photon from the center of the Sun to reach its surface, it usually takes tens and hundreds of thousands of years. And in order for this photon to fly from the surface of the Sun to the Earth - a distance almost 217 times that of the previous distance - it takes 8 minutes. Why? Because inside the sun, the photon experiences multiple scattering. A photon cannot simply exit, it gets absorbed, then radiates, and flies in other direction, scatters and so on, its movement complicated,” the astronomer explains.

High-mass stars radically rebuild their surroundings and thus redetermine the structure and evolution of galaxies. One of the modern hypotheses is that high-mass protostars grow due to episodic accretion (an increase in mass due to the influx of matter from the surrounding objects). Large fragments of the surrounding matter fall on the star, dying in bright flashes. Astronomers from around the world managed to register these bursts only a few times, since such events are very rare. Moreover, earlier only the consequences of the bursts were tracked, not the propagation of the “energy wave”.

In fact, in the course of this study, scientists received not only clear confirmation that massive stars grow due to episodes of absorption of the surrounding objects, but also tested a new tool for studying the surroundings. It allows them to see extremely small details over long distances.

To see the details, astronomers made observations using the method of radio interferometry with extra-long bases. The group of scientists used only telescopes located in Australia and one in South Africa, since the G358-MM1 is visible only from the southern hemisphere. The outbreak was observed twice, with a gap of 26 days.

“Usually time for working on such telescopes is allocated to the group once every six months according to the results of a serious competition. But flares of young massive stars rarely and in unpredictable times. Therefore, a special time was allocated for our project, which indicates the importance of such observations, ”explains Andrei Sobolev.

The large-scale research project coordinated by the Maser Monitoring Organization involves scientists from Japan, South Africa, Russia, Australia, China, Germany, South Korea, Italy, the Netherlands, Poland, Chile, the United Kingdom, the United States and other countries. The world's largest radio and infrared astronomical instruments are used. Scientists from Russia, China and Germany took the load of interpreting the most of the results. The radiation burst that astronomers managed to trace is one of the results of their work.

The plans of scientists stretch beyond - from studying the nature of protostars to examining the mechanisms of their formation, and looking deep into their environment.