University Is Determined to Stregthen Partnerships in India and China
More

University Is Determined to Stregthen Partnerships in India and China 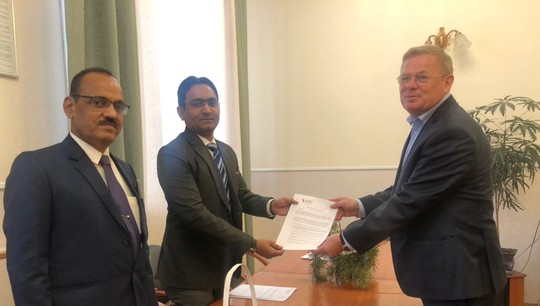 During the visit of two delegations from India and China, the sides agreed upon further cooperation. Photo: Department of Educational Programs.

In January, Ural Federal University was visited by delegations from a group of institutes of Sanjivani (India) and Heilongjiang University (China).

From January 13 to January 14, Indian guests held working meetings with Vice-Rector for Academic Affairs Sergey Knyazev and Director of the Department of International Educational Programs Yana Vysotskaya, with Zoya Belyaeva, Head of the Construction Department of the Summer University Education Program, during which they signed a memorandum of understanding and discussed further collaboration between universities.

“Partners from India have always shown great interest in the educational programs of the Institute of Construction and Architecture. For 6 years, we have been successfully implementing short-term projects, Summer University, for example, and have accepted hundreds of students from India at the Ural Federal University,” the department of international educational programs noted.

Representatives of the Sanjivani Institutes Group and the Department of International Educational Programs discussed the 2020 Summer University projects, joint graduate programs, and participation in conferences. The department also prepared a cultural program for the Indian delegation and showed the city.

In the light of these events, Heilongjiang University and the Ural Federal University are planning to implement a double-degree program in regional studies.

In addition, Heilongjiang University is ready to conduct free Chinese language courses for teachers at the Confucius Institute of UrFU and send its students to short-term Russian courses. To implement these plans, meetings were held with the director of the preparatory department of the Russian language for foreign students Nadezhda Ivashova and the Director of the Confucius Institute of UrFU, Maria Guzikova.