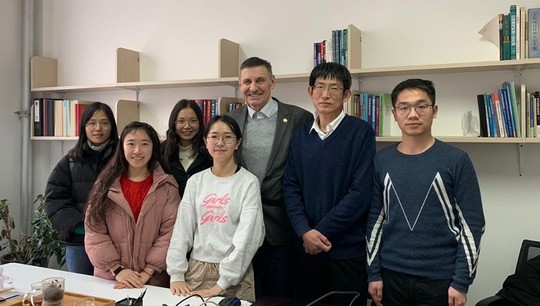 As also a part of the visit, Vladimir Shur met with dozens of Chinese students, encouraging them to work with Russia. Photo: V. Shur's roll.

From January 6 to 11, our Prof. Dr. Vladimir Shur, Director of Ural Collective Use Center - Modern Nanotechnologies visited Tsinghua University (Beijing). During the visit, many negotiations were held, ensuring further successful cooperation between universities.

In particular, Shur recalled the results of joint research and set plans for further scientific cooperation with the laboratory of Professor Yong Zhang from the Institute of Nuclear and New Energy Technologies. Currently, research project is being carried out with the support of the international grant (Topic: Investigation of the domain and phase structures in nanostructured ferroelectric glass ceramics based on barium-strontium titanate). In addition, bilateral visits and internships of Chinese graduate students are planned for measurements on the equipment of the Ural Collective Use Center - Modern Nanotechnologies.

The possibility of further developing partnerships with the Institute of Sino-Russian Strategic Cooperation recently established at Tsinghua University was also considered. In particular, the conditions for cooperation between the Center of UrFU and one of the most advanced laboratories of Tsinghua University - The Future Laboratory were specified. In early March this year, a representative from Tsinghua will visit UrFU to solidify the partnership.

During a short visit, Prof. Shur also managed to visit the international center of dielectrics of Xi'an Transport University. The fourth seminar was held here for representatives of three countries: Russia, China and India, implementing the BRICS project “Physical foundations of domain engineering in piezoelectric single crystals of the PMN-PT family and lead-free piezoceramics”.

In addition, they discussed the possibility of participation of representatives of UrFU in the development of the Sino-Russian innovation park “Silk Road”, created in 2019 in the new innovative city of Fendong, located near the new campus of Xian Transport University.

Tsinghua University is one of the leading universities in China and ranks 16th in the QS ranking.

In December 2019, as part of his business visit to Tsinghua University, Vice-Rector for International Relations of UrFU Sergey Kurochkin attended the official opening ceremony of the Russian Research Institute, established at Tsinghua University to strengthen cooperation and exchanges with educational, research institutions of two countries. He also spoke at the Summit of Russian-Chinese strategic cooperation in the new era and took part in the discussion on the main directions of development of international cooperation between China and Russia in the fields of education, science, technology and culture.