The model is applicable for supersaturated or metastable liquids. 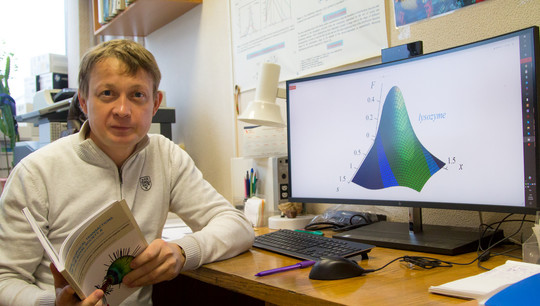 A group of researchers from the Laboratory of Multiscale Mathematical Modeling of the INSM UrFU has expanded the mathematical model for growing crystals. In the model, you can set parameters (for example, the number of nuclei, their size or how they will be distributed in the system) and thus grow crystals of a given shape, size and with the necessary properties.

This is extremely useful in solving applied problems: in biology, industry, materials science. For example, for growing synthetic gemstones or light converters for installing controlled thermonuclear fusion; or to form the required properties of high-strength steels. In addition, the model can be used in biomedical applications: for example, in the synthesis of insulin, hemoglobin or proteins.

The study was supported by the Russian Science Foundation (“Kinetics of phase transitions in metastable systems: nucleation and crystal growth with applications to crystallization of biochemical compounds”; 18-19-00008). Some of the latest results are presented in Physics Letters A, (at ScienceDirect.com).

“The formulas are new, they generalize arbitrary laws of growth, arbitrary nucleation frequencies, an arbitrary initial distribution of crystals in the system,” Dmitrii Aleksandrov, the head of the grant and laboratory, explains. - We described the dynamic process of growing crystals in supersaturated solutions. We found one of the main characteristics of the process - the particle size distribution function depending on the time instant, which allows us to determine how many crystals of a particular size exist in the system at each time moment.

Mathematics calculated the crystals' growth in the intermediate stage. There are three stages in total. Initial - when a large number of viable small-sized nuclei are formed, located far from each other. The second - the intermediate stage - is the rapid growth of existing particles and the emergence of new ones; essentially a crystal growth process. The final stage begins when the nuclei reach macroscopic sizes, and the process of nucleation of new particles stops; in other words, crystals practically do not grow.

“In crystallizers - crystal growing plants - as a rule, the process proceeds at an intermediate stage. They take the solution, add an impurity there, the crystals grow, taking on supersaturation. They are removed and then the impurity is added again and so on. About the same way crystals grow in caves,” says Dmitry Alexandrov. - When growing crystals in laboratory conditions, it is important that the crystal granules are formed of a certain size and with desired properties. This can be calculated using our model.”

The plans of mathematicians are to generalize the theory of nucleation and crystal growth in binary melts, when the mathematical model of the process is complicated (additionally, the mass transfer of the impurity component dissolved in the melt is taken into account). In addition, it is planned to formulate a more complex statement of the problem and develop methods for solving it.

The group of researchers includes employees of the laboratory of multiscale mathematical modeling and the department of theoretical and mathematical physics of Institue of Natural Sciences and Mathematics UrFU.