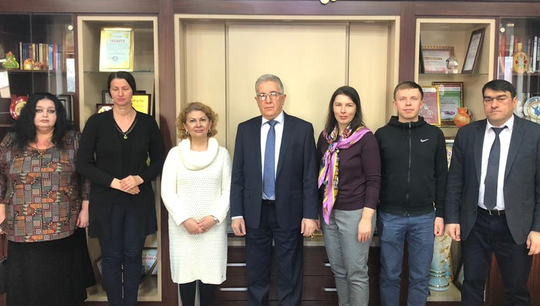 From January 17 to 24, teachers of the Ural Federal University visited the Russian-Tajik (Slavic) University and the Tajik State Institute of Languages ​​to realize the project "Excellent English for a Great Future". The project is being implemented under a grant from the World Bank that universities have won.

The grant competition was held in the summer of 2019, with 30 projects participating. Under the terms of the grant, Tajik universities should have a foreign partner. Such partners were UrFU and the University of Jyväskylä (Finland).

Now UrFU will help the Russian-Tajik (Slavic) University and the Tajik State Institute of Languages ​​to improve the system of teaching English. And as a first step, teachers of UrFU spent a week at universities in Tajikistan. During that time 300 students and 53 English teachers tested their skills and traits.

Experts of the project were faculty members from the Ural Federal University: Tatyana Rasskazova, Director at the Cambridge Center, Maria Guzikova, Director of the Department of International Relations and Alexander Ovchinnikov, Leading Engineer at the Department for Support of Technical Training Aids.

“Based on the results of testing, a program for teaching English will be created, and our university will act as a consultant. We will also help in the training of teachers. Twelve teachers will pass the CELTA Cambridge program in two months, the rest in the online EMI program,” said Tatyana Rasskazova.

The grant will be implemented in two years, so in August 2021 a second test will be carried out, which will show how the students' excellency of English will have been developed.