Sverdlovsk Region will fund the project 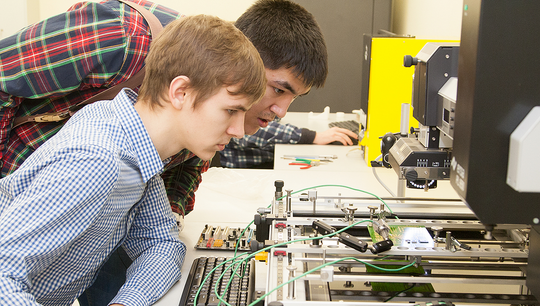 With the Business and Science combined, REC will facilitate innovations. Photo: Ilya Safarov.

26 enterprises from the Sverdlovsk, Chelyabinsk, Kurgan regions sent applications to the Ural Federal University for entry into the world-level Ural Interregional Research and Educational Center(UIREC). Agreement on the creation of the UIREC combining potentials of Sverdlovsk, Chelyabinsk and Kurgan regions was signed in July 2019 at the Innoprom international industrial exhibition. On the same day, the concept of the center was presented to President of the Russian Federation Vladimir Putin and received the approval of the head of state.

According to the Rector Koksharov, by combining science and business, it is planned to create world-class projects in the areas of: new materials, new production technologies, and solving problems in the field of energy and ecology.

“Today, issues of creating effective enterprises are relevant for the whole world - with the maximum revenue and the minimum amount of waste that can be recycled and which are related to low-hazard class. This is one of the parameters for evaluating the prospects of projects,” said Victor Koksharov.

Today, work is underway to form the governing bodies of the Ural REC. In the first half of 2020, it is planned to create the supervisory and managing boards of the Ural REC, as well as approving the program of the center’s activities, which will form the basis of the application of the Sverdlovsk region for participation in the competitive selection, planned for the Ministry of Science and Higher Education of the Russian Federation.