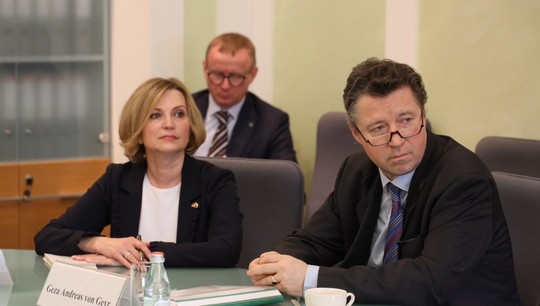 The Arctic, AI, climate change are the topics of cooperation between Russian and German educational and scientific centers, according to Geza Andreas von Geyr, Ambassador Extraordinary and Plenipotentiary of the Federal Republic of Germany to the Russian Federation, on January 31. German top-level diplomat met with the rector of UrFU Victor Koksharov and university students.

“Of course, it would be useful to hold a scientific symposium on the topic of cooperation between Russia and Germany with leading historians and political scientists,” the diplomat is sure. - A study in the field of conflict history is also interesting and relevant. As a historian, I think that it is worth taking the other side - conflict prevention - based on existing historical knowledge.” Victor Koksharov noted that Germany is the university’s most active partner in science: over the past three years, university scientists have published 606 articles together with German colleagues.

During the meeting, it was possible to discuss the upcoming Russian-German summer school “Environmental Protection and a New Energy Partnership between Russia and Germany” in Yekaterinburg in August, which will be held during the Russian-German year of scientific and educational partnerships 2018-2020.

The diplomat suggested students to discuss topics of global international relations, including cooperation on conflict resolution, scientific achievements, including the field of artificial intelligence, climate and environmental change, economic relations, the British exit from the European Union, the format of pragmatic German-Russian cooperation, and historical memory.

“I study Russian because I know: with learning a language, much more is transmitted than just grammar, words, culture,” explained Geza Andreas von Geyr. - Exchange and dialogue - this is what concerns an ambassador. We should try to make it so that there is more exchange and dialogue, build the transcultural dialogue. It brings us joy, and rightly so. We are those who are trying to destroy walls, borders, build bridges, establish dialogue. We do this at various levels: between states, between societies. And we always make double efforts: explaining my position as a German, and also as a European to the Russian government, to Russian society. And it is important that the other side expresses its readiness to hear the position. Thus, having the opportunity to hear and understand, you can come to better results, perhaps to solve problems."

Russian-German Summer School is a joint project of the Ural Federal University and the Berlin Technical University TU-Campus EUREF, as well as the Technical University of Dortmund. The summer school has been held since 2015 with the financial support of Russian and German companies. In 2016, the venue was Yekaterinburg, where the then Minister of Foreign Affairs of Germany, Honorary Doctor of UrFU Frank-Walter Steinmeier (now President of Germany) and Russian Foreign Minister Sergey Lavrov met with students. In 2019, the summer school “Smart Electricity and Engineering” was held at the Technical University of Dortmund and ended with a trip to Berlin with a visit to the EUREF campus and the Bellevue Palace.