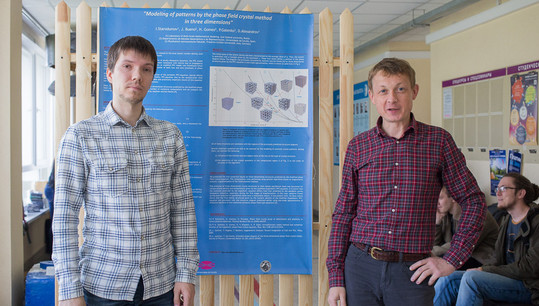 Ilya Starodumov (left) and Dmitry Alexandrov (right) are the guest-editors of the special issue open for access. Photo: Elizaveta Plekhanova.

Dmitry Alexandrov, Petr Galenko, and Ilya Starodumov, employees of the Laboratory of Multiscale Mathematical Modeling, Institute of Natural Sciences and Mathematics of UrFU (INSMa UrFU), headed the editing of a special issue of The European Physical Journal: Special Topics - EPJST (impact factor: 1,660). The issue is titled "Modeling and Simulation of Heat/Mass Transport, Nucleation and Growth Kinetics in Phase Transformations", published on February 11 and is available on the website of the EPJST page.

“The present theme issue is devoted to recent trends and research directions in the phase transformation phenomena occurring in metastable and heterogeneous materials,” explains Dmitry Alexandrov, editor-in-chief of the issue, head of the laboratory. - The articles of scientists present the latest results on modern theories, experiments and computer modeling in a wide area of ​​phase transformations. Particular attention is paid to traditional areas of research, which provide the theoretical basis for recent simulations and experiments that are specifically highlighted in the structure of the special issue.”

The journal publishes papers on actively developing research areas, such as phase field modeling, laser surface treatment, nanostructures and the influence of external fields on the formation of the microstructure. Scientists talk about the latest research in the field of dendritic crystal growth, modeling crystal growth, as well as the effect of hypertension - burning cancer cells by heating magnetic particles.

In total, the thematic issue holds 37 articles by scientists from India, Germany, the USA, France, Great Britain, Egypt, South Korea, Belarus, Morocco, Belgium, Ukraine, and Russia. In part, the input published in the paper was supported by the Russian Science Foundation (RSF) (project 18-19-00008 “Kinetics of phase transitions in metastable systems: nucleation and crystal growth with applications to crystallization of biochemical compounds”).

The European Physical Journal is a series of peer-reviewed journals indexed in all major databases, covering the entire spectrum of theoretical and applied physics, including related interdisciplinary subjects. The editorial boards of the EPJ journals are made up of eminent scholars from around the world who are committed to the highest standards of scientific quality.