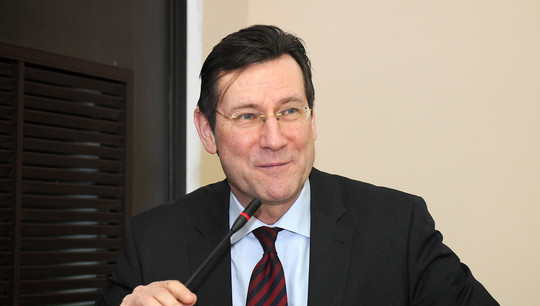 On February 12, the IX International Scientific and Practical DAAD-Konferenz “Methodological and Regional Studies Aspects of Interactive Classes in the German Language” started in UrFU. The conference is dedicated to the 100th anniversary of Ural Federal University. The event was attended by over 70 school teachers, university teachers and German language translators from Yekaterinburg, Perm, Tyumen, Chelyabinsk, Moscow, Krasnouralsk and other cities.

Vice-Rector for Academic Affairs Sergey Knyazev and Consul General of Germany in Yekaterinburg Mathias Kruse greeted the guests and participants.

“The Consulate General strongly supports regional activities to promote the German language. The conference at the Ural Federal University, now being held for the 9th time, shows that the German language thrives in the Ural region, as teachers are striving for permanent professional growth. Therefore, we will continue to provide our support,” said Mathias Kruse.

Lecturers are leading teachers and researchers from Germany, Austria and Russia. On the first day of the conference, reports were made on the study of German as a foreign language during the World War Two, the linguistic and cultural diversity in the training of teachers, the peculiarities of the translation of journalist texts and the preparation of scientific research.

This year's novelty was the involvement of future linguists-translators, students of the Department of Foreign Languages ​​and Translation, studying German as the first foreign language, for whom three seminars were organized on the importance of knowledge of sign language, the features of learning German in an online format and how receive a grant for study exchange.

At the end of the conference, participants will receive certificates from the German Academic Exchange Service (DAAD) confirming their new qualifications.