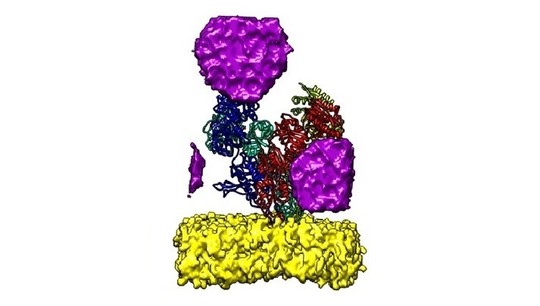 An international scientific group, organized by Associate Professor of the Department of Theoretical and Mathematical Physics of the Institute of Natural Sciences and Mathematics of UrFU Yevgeny Moskovitz, came down to molecular level to investigate the influence of neon, argon and xenon gases on the receptors of brain cells. Scientists created a molecular model and tested it on supercomputers at the Oak Ridge National Laboratory (USA).

The data showed that inert gases interfere with the operations in the ion channels (proteins provide the exchange of cells with the environment by matter, energy and bits of information). Bubbles of gas block the activity of neurons cells at the level of the lipid membrane and the protein embedded in it. Under certain conditions, heavy inert gases surround the protein and produce an anesthetic effect (euthanize a person), and the lungs "inflate" the membrane, disrupting electrical activity and cause hyperexcitability of the central nervous system (the CNS) making it break down, and that is called the high pressure neurological syndrome (HPNS). The full results of the study are presented in the Scientific Reports journal.

“There are different theories, but scientists still cannot say for sure what is going on with the human brain at the molecular level under the effects of anesthesia or, for example, even alcohol,” says Yevgeny Moskovitz. - Of all anesthetics from the chemical point of view, the simplest are inert and diatomic gases. Even nitrogen, which is always in the air, can lull a person at an absolute pressure of four atmospheres.”

The study is extremely relevant in terms of the application of clinical anesthesia, as well as in the work of professional divers (both oxygen and nitrogen at a high depth are dangerous for humans). If scientists are able to identify at the molecular level the causes of a person falling asleep affected by inert gases, for example, nitrogen, they will understand how neurons are functioning. To dig into this, Yevgeny Moskovitz wants to calculate the functioning of gas and protein over a long period of time extrapolating his work on a larger scale.

“We saw that gas bubbles are distributed differently on the molecule. However, the protein structure does not change much, which means that the function of anesthesia is not something static that can be seen in one frame; and we modeled the process in fractions of a microsecond,” the scientist says. “Since it’s difficult to determine having one molecule, we need to gradually increase the size of the simulation box in order to capture as much of the entire neuron as possible.”

Moskovitz’s plans are to study groups of molecules in the membrane of neurons: how they interact with each other during anesthesia in order to reliably understand and describe the essence of the process.

For the research, he received two grants from the Russian Federal Property Fund (December 2019 and February 2020). The first supports the continuation of the research of inert gases, the second (won with Japanese colleague Mitsuhiro Ibara of MANA International Center for Materials Nanoarchitectonics) donates funds to the computer simulation that will help develop polymers with shape memory for medical applications.

“Both projects are united in the common topic of the Complex Biological Interface, because they study processes at the boundaries of various media (phases) - a biological membrane / polymer medium and protein molecules,” explains Yevgeny Moskovich. - The second project is aimed at research on the development of technology for the synthesis of innovative polymer materials with shape memory based on polycaprolactone. These are unique materials with a strain factor of 4–5. This means that, for example, a ball of five centimeters can be stretched to 25, released, and it will again return to its original shape. "

Shape memory is important because alive cells are grown on a polymer network. This matrix helps regulate cell growth and create the desired shape. It is also needed so that cells can interact with each other and form a living tissue. Such materials offer unique opportunities in the field of bioengineering technologies: transportation of drugs, wound healing systems, and the cultivation of new organs. In fact, this is medicine of the 21st century.

“Already there is an opportunity to grow a bladder from healthy cells of the patient. Replace, for example, an organ affected by cancer with that grown on its own cells on a polymer matrix, ”Moskovich explains. - In the future, 10–20 years, it will probably be possible to grow such a complex organ as the liver or lungs. Mitsuhiro Ibara has remarkable results, and we must help him with our methods. Through the efforts of scientific groups from all over the world, medicine will reach a new level, and here should be our modest contribution, we should try to participate in this. ”

Eugene will carry out the computational work on both projects on supercomputers at the Ural Branch of the Russian Academy of Sciences (Ural RAS cluster). He plans to attract young scientists to the projects.

“How the work at UrFU will go, in many respects depends on how many young people I can attract to work. I want to assemble a team. Let these be undergraduate students of relevant faculties with minimal experience in scientific work, no big deal. Then they can go further with us,” the researcher says. - They have the opportunity to undergo internships in Japan, in Canada with quite a decent salary. I do not urge to emigrate. I’m saying that you can actively get involved in work, study there and come back as a specialist, as I did, having received a PhD from the Israeli Institute of Technology - Technion, and completed internships with postdocs in the USA and South Africa, at the University of Cape Town.”

The scientist plans for 2020 and the following years - to determine at the molecular level the mechanisms of anesthesia with inert gases and the neurological high pressure syndrome. In addition, it is expected to observe the mechanics of the polymer and polymer fibers at the nano level.