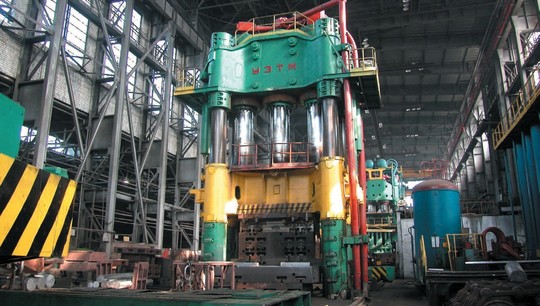 The technology will be used for this stamp tooling machine at the Kamensk-Uralsky Metallurgical Plant - PJSC 'KUMZ'. Photo: KUMZ.

Engineers of the Ural Federal University have proposed a groundbreaking technology for induction heating for stamp tools. The machine consists of several inductors (attached to the upper and lower plates of the vertical hydraulic press), as well as power supplies and cooling stations for power supplies and inductors. The engineering 'know-how' makes inductors heat up the die tool during the operation of the hydraulic press for at least six hours. As a result, there is no need to stop the press, nor changing the die tooling in order to heat it in an electric furnace.

"To start, the technology meets the principles of resource conservation and energy efficiency. Secondly, the implementation of the project will lead to the emergence of a one-of-a-kind technologically innovative, economically efficient, globally competitive domestic production of large-sized stamped products from magnesium and aluminum alloys for aircraft construction,” explains Alexander Cherepanov, the Deputy Director of the UrFU Center for Enterprises Cooperations."

This technology is a breakthrough. Today, in order to obtain details for aviation wheels (made of magnesium and aluminum alloys with a homogeneous fiber structure) the die tooling has to be heated for 24 hours in electric resistance furnaces and then installed on a hydraulic press. The problem is that after one and a half hours of operation of the press, the die tooling cools down, and it must be shut down and changed. An 8-hour work shift takes two such cycles. As a result, the press works with long breaks, for three hours per shift, and the company spends additional energy on heating die tools in round-the-clock working electric furnaces.

The installation of induction heating of a stamp tool, which was developed by employees of the department "Electrical Engineering and Electrotechnological Systems" of Ural Federal University (experienced scientists, graduate students, students), will change the situation.

"Metallurgists will have the opportunity to use a vertical hydraulic press for three work shifts per day. Its productivity will double, energy costs for the production of large-sized aircraft stampings will decrease by 6.5%, the complexity of the process - by 14.5%. Manual operations to reinstall the stamping tool will be excluded, working hands and electric furnaces will be freed, working conditions will improve," says Fedor Tarasov, head of the development team, associate professor of the department. "The most important result is that by 2025 production will increase from 320 tons to 580 tons per year, its quality will increase and cost will be reduced, which is fully consistent with the interests and needs of Boeing, Airbus and Sukhoi."

At the same time, the technology of induction heating is universal. Approaches to three-dimensional mathematical modeling of electromagnetic and thermal fields, as well as experience in the design of induction heating systems, make it possible to obtain the characteristics of induction equipment (voltage, currents, frequencies, design parameters for heating die tooling) of different scales and for different heated material.

“The developed technology can be implemented both in other Russian stamping industries and abroad. We are pleased that in this way UrFU confirms its importance as an indispensable pillar of the real sector of the economy, ”concludes Fedor Tarasov.

The project is being implemented jointly with the Kamensk-Uralsky Metallurgical Plant. He received the support of the Government of the Russian Federation in priority areas of scientific and technological development "The transition to environmentally friendly and resource-saving energy ...". The government will provide subsidies in the amount of 50 million rubles, the company Aluminum Products (the manager of KUMZ) - the investments that are similar in volume. The government finances research and development work of university scientists, the plant modernizes the industrial site. According to the agreements, by the end of 2021, the factory workers will receive a set of equipment that will have been tested and installed.

"The cooperation of university science and industry in the person of Ural Federal University and KUMZ will serve to establish the technological leadership of our country and strengthen its position in foreign markets. It is a normal thing that the project received high marks from government experts and was among the best that applied for state subsidies," Alexander Cherepanov believes.

The details for aircraft wheels for the companies like Boeing, Airbus, Sukhoi are produced at the Kamensk-Uralsky Metallurgical Plant. The KUMZ Plant is a leader among Russian enterprises in the production of large-sized aircraft stampings from aluminum and magnesium alloys. The plant has a unique hydraulic press with an effort of 30 thousand tons.