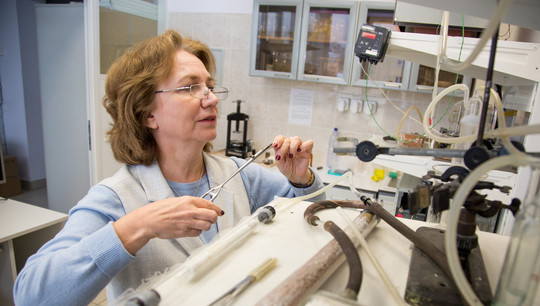 Irina Animitsa (on the photo) told us that the oxides must be inert to the carbon dioxide, sustain high temperatures, and must not get carbonized. Photo by Gleb Yeremenko.

Scientists of the Department of Physical and Inorganic Chemistry, Institute of Natural Sciences and Mathematics of UrFU created a fuel cell that will convert the chemical energy of hydrogen into electricity. They were the first in the world to create an electrolyte with a given set of properties by doping oxygen with anions (negatively charged ion) of fluorine. The results of the study are presented in the journal Solid State Sciences.

"We see as our task to create a fuel cell that will produce electricity at a temperature of 300-500C. This will replace polymers and platinum with complex metal oxides based on zirconates, niobates and other compounds: such materials are cheaper, characterized by high ion (proton) conductivity and chemical stability. If, at the same time, expensive oxygen is replaced by ordinary air, then the carbon dioxide contained in it enters into undesirable chemical processes. Therefore, oxides, in addition to the listed properties, must be inert to carbon dioxide, not carbonized. And, of course, be resistant to high temperatures," says Irina Animitsa, professor at the Department of Physical and Inorganic Chemistry, UrFU.

A solid oxide fuel cells (SOFC) is an electrochemical system that consists of an electrolyte (a conductor of positively charged hydrogen ions), protons (a polymer membrane, salt, or oxide are electrolytes) and two electrodes in contact with the electrolyte of negatively charged electron conductors. To the electrodes, anode and cathode, hydrogen and oxygen, respectively, are constantly supplied. In a fuel cell, chemical energy is converted into electrical energy by combustion, part of the chemical energy is converted into heat, which is removed from the system, like the oxidation product, i.e. water.

The efficiency of the solid oxide fuel cell is about 70%, which is much higher than the efficiency of thermal power plants, gas turbines and internal combustion engines, and the emissions of harmful substances either have zero values are times or tens of times less.

The disadvantage of fuel cells is the amount they cost. Currently, the fuel cells operate at room temperature, the polymers that are used as electrolytes in them are unstable and short-lived. The platinum from which the electrodes are made is expensive, as well as the oxygen. These circumstances hinder the mass production and use of fuel cells.

"The next major task is to develop electrodes. Our colleagues in the department of physical and inorganic chemistry, as well as from the Institute of High-Temperature Electrochemistry of the Ural Branch of the Academy of Sciences, are engaged in this. Then, the electrolyte and electrodes will be tested in the assembled fuel cell. So we will create conditions for reducing the cost of fuel cells and its introduction into mass production and, therefore, for the emergence of economically viable and environmentally friendly electricity generation," summarizes Irina Animitsa.

The transition of mankind to hydrogen-based energy economy is already underway. At the beginning of the XXI century, 15 of the most developed countries, including Russia, established the International Partnership on the Hydrogen Economy. According to plans, by 2050, hydrogen should completely replace gasoline. All the world's leading car manufacturers are developing cars powered by hydrogen engines and fuel cells and hydrogen gas stations. The speed and range of these cars are constantly growing. In 2016, the first flight of a solid hydrogen fuel aircraft took place in Scotland; it is a granule from a chemical compound that releases hydrogen when heated. The same technology applies to cars.

Today 85% of hydrogen is obtained from natural gas, there is experience in the synthesis of hydrogen from bacteria and microalgae. The United States and South Korea are jointly developing programs for using nuclear reactors to produce large amounts of hydrogen. The simplest and most environmentally friendly way to produce hydrogen is the splitting of water into hydrogen and oxygen by electrolysis, that is, under the influence of electric current. Despite the fact that the cost of such a hydrogen production technology is high, it has been successfully implemented in Norway.

The vast majority of scientists are convinced that global warming is caused by the greenhouse effect and, therefore, by human activity, primarily the burning of fossil fuels (oil and coal) and carbon dioxide emissions. Since the middle of the last century, their volume has increased by more than 3.5 times - from 9 to 33 billion tons. In large cities, air pollution is associated with exhaust gases by 80–90%. For example, in Yekaterinburg, the maximum permissible concentrations of carbon monoxide (CO) are doubled, for the hydrocarbons 30 times. In this case, CO blocks hemoglobin, which supplies blood with oxygen, and hydrocarbons destroy the immune system and contribute to the formation of malignant tumors. Compounds hazardous to health and life are concentrated at the surface of the earth, therefore, the victims of their exposure are primarily children.

At the same time, the reserves of available hydrocarbons are reduced, and the development of new deposits leads to the degradation of production areas, including the Arctic, as well as to the melting of permafrost and the release of enormous volumes of methane, which exacerbates the greenhouse effect.

Thus, the humanity faces the urgent task of moving from hydrocarbon energy to new types of fuel for electricity production. Since the 70s of the last century, hydrogen, H2 has been considered in this capacity: its advantages are inexhaustible reserves and environmental friendliness, because when it is burned, it forms water. In addition, hydrogen is safer than other types of fuel during storage and transportation. H2 has long and safely been transported through hydrogen pipelines, as well as in cylinders and cryogenic containers. It is significant that in the entire history of the rocket and space industry there has not been a single explosion due to the exploitation of hydrogen.