An UrFU Master Student Ascended on the Annapurna I Base Camp

Being part of the alpinist group, Das Anirban ascended on the altitude of 4200 meters 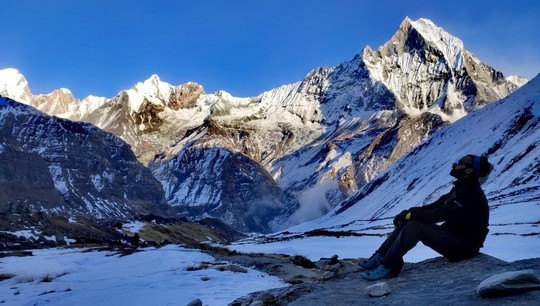 In December, an Das Anirban, a graduate student of the Higher Achievement Sports program of the Institute of Physical Culture, Sports and Youth Policy of Ural Federal University, as part of a group of tourists from India, climbed the Annapurna base camp, closely approaching the most dangerous peak in the world. The height from the foot to the ascent point was 4200 m.

“The goal of the ascent was to test my physical abilities by reaching the Annapurna base camp in five days, following a difficult path 70 km with all the equipment in extreme cold and at high altitude,” said Das Anirban.

The Annapurna massif is located in central Nepal and is part of the southern spur of the Main Himalayan Range. The highest point of the range is Annapurna I (8091 m) - the tenth highest among the 8-thousand high peaks of the world. Annapurna I is considered to be one of the most dangerous eight-thousanders in terms of mortality among climbers over the years of climbing. Annapurna Base Camp is located in the heart of the Annapurna Mountain Range.