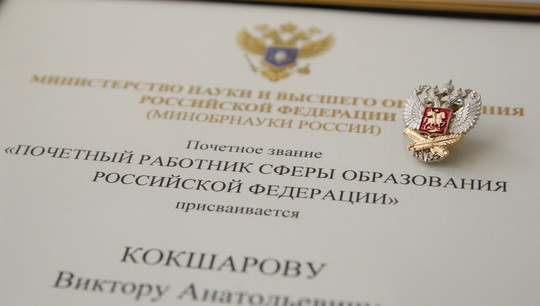 The honorary title was awarded for significant achievements in education and for many years of conscientious work. Photo: Ekaterina Lazareva.

The rector of the Ural Federal University Victor Koksharov was awarded the title of Honorary Employee in the Field of Education of the Russian Federation. The diploma on conferring the title, signed by the Minister of Science and Higher Education Valery Falkov, noted significant achievements in the field of education and many years of conscientious work of the head of the university.

Andrei Rudskoy, the Rector of the St. Petersburg Polytechnic University Peter the Great, an academician in the Russian Academy of Sciences congratulated Victor Koksharov on the title. As Rudskoy said, this title by a long journey of daily work, was a confirmation of authority in the scientific and educational community, recognition of professional achievements and high trust on the part of the state in the person of the Minister of Science and Higher Education of the Russian Federation.

“In your person as the rector of the Ural Federal University - the leading scientific and educational center of your region and one of the largest universities in Russia - we see a reliable like-minded person who makes a great contribution not only to the effective organization of the educational process in his university, but also to the preservation of the best traditions national education system and high quality training of specialists, - said Andrei Rudskoy. - I am sure that you will not only save the best practices of past years, but also significantly increase them. I sincerely wish you success in the implementation of all your plans, may there always be a team of like-minded people, good health, inexhaustible energy, tons of luck and optimism!”

This week Nikolai Tsukanov, the Plenipotentiary Envoy of the President of the Russian Federation in the Urals Federal District, thanked Victor Koksharov for his diligent work and for strengthening of international relations of the region.