Physicists Create Models of Intra- and Intercellular Transport of Substances

The trasportation process resembles a network of tram rails or railways, the scientists say 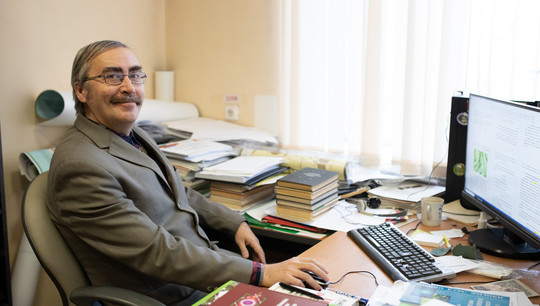 As Prof. Melkikh says, the quantum effects are involved with the intracells processes. Photo: Ilya Safarov.

The faculty members of the Department of Technical Physics of the Ural Federal University Professor Alexei Melkikh and associate professor Maria Sutormina have developed unique mathematical models of intracellular and intercellular transport of particles that have no analogues in the world. An article on the work of Ural physicists bringing humanity closer to the creation of artificial cells was published in the journal Progress in Biophysics and Molecular Biology.

“It should be recognized that while science does not fully understand how the cell works and how it works. Complex intracellular molecules such as proteins, RNA, DNA, are made up of thousands of atoms. Of the colossal multitude of options for self-organization, they “choose” such as to fully fulfill their “duties”, interact very precisely with each other, and avoid confusion and chaos. My idea is that they are controlled by quantum effects - special forces that recognize molecules and direct them along clearly marked routes, to set goals, exactly where the molecules should be and where they are indispensable. It resembles a network of tram rails or railways, ”the scientist explains.

This is still a hypothesis that is waiting for experimental confirmation (in his works, Alexey Melkikh describes how to conduct the necessary experiments). However, many intracellular processes, from the point of view of a scientist, cannot be explained otherwise.The knowledge about the structure of cells obtained using these models will serve the development of nanomedicine, which eliminates the pathology of the body at the level of cells and molecules. Another area of ​​application of the models of physicists of Ural Federal University is the so-called synthetic biology, the purpose of which is the creation of artificial cells.

“In the future, colonies of artificial cells will be utilized, for example, for the extraction of precious metals from seawater or minerals in aggressive environments, or in airless spaces - at the bottom of the oceans, and other planets. To do just this, you need to understand how the cell is constituted, know all about its activities, in particular, the transporting system,” explains Alexey Melkikh.

Transporting substances (both neutral particles and positively or negatively charged ions) into and out of the cell is similar to the operation of an excavator or a pump. Moreover, a given protein structure embedded in the cell’s membrane is constantly “tuned” to particles of a certain substance, for example, sodium or potassium. And to the extent necessary for the normal functioning of the cell. For each "load" a separate channel or pump is intended. The energy source for the transport mechanism is the process of converting adenosine triphosphate into adenosine diphosphate.

Alexey Melkikh and Maria Sutormina are exploring the cellular phenomena. Scientists are trying to understand how such intracellular components, such as contractile vacuoles, are involved in delivering water to a cell or how neurotransmitters are responsible for transferring electrochemical impulses from a neuron to a neuron or other cell in the body. In addition, they investigate how the assembly of the protein elements of the cytoskeleton (cell framework) - microtubules and microfilaments - and the transport of proteins inside the cell using these structures or how the transport of substances through plasmodesmata - opening and closing bridges that connect neighboring plant cells is organized.

“Our science school is nearly 30 years old. For all that time, we have built models with which you can predict the behavior of the diverse elements of cells of different sizes, structure, and purposes. The range of our scientific interests is vast: archaea, bacteria, algae, plants, animals, people. In many cases, our models are the ones and only in the world, their reliability is confirmed by experiments and measurements of our colleagues in Russia and abroad,” says Alexey Melkikh.