UrFU Academic Choir Is One of the World's Top-100, German Ranking Says
More

UrFU Academic Choir Is One of the World's Top-100, German Ranking Says 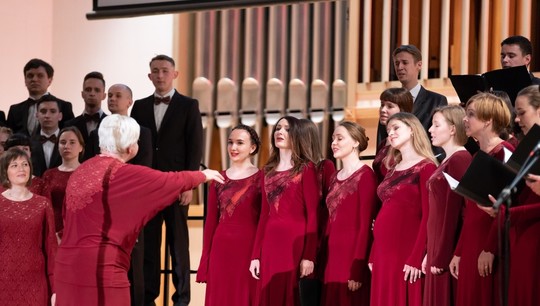 UrFU Choir is the winner of many competitions and festivals. Photo: Oksana Dolgosheeva.

“I’m glad that the world community rated us and that we managed to grow in ranking from 109th position,” says the head of the choir Svetlana Dolnikovskaya.

In the near future, the choir will have a trip to the World Choir Games, which will be held in July in Flanders (Belgium).

The academic choir of students of UrFU was revived by Svetlana Dolnikovskaya in 2003. The team consists of students, graduate students and graduates of the university. The team won 11 Grand Prix of international choral competitions in Austria, Italy, the Czech Republic, Russia and other countries, 32 first places and many second and third. The team took part in the All-British Choir Congress (Manchester), in two Easter festivals of V. Gergiev (Yekaterinburg), in the combined choir of the best choirs of Russia in honor of the 70th anniversary of the Great Victory (Moscow).

The top 100 best choirs in the world included 12 student and children's choir groups from Russia. The world ranking of choirs has existed since 2000. The compiler of the rating is the German society Interkultur - a world leader in organizing international choral competitions and festivals since 1988.