UrFU Faculty Member Bathed in the Waters of Antarctic
More

UrFU Faculty Member Bathed in the Waters of Antarctic 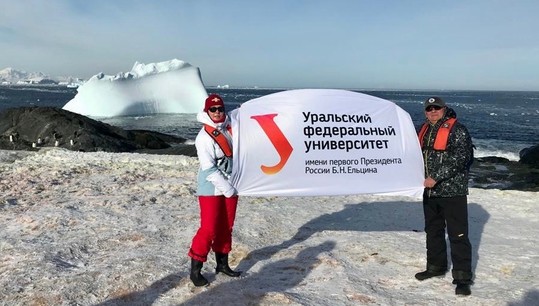 Alyokhin presented the flag of UrFU to the captain of the ship. Photo from V. Alyokhin.

In March, in honor of the 200th anniversary of the discovery of Antarctica and the 100th anniversary of the Ural Federal University, the head of the Department of Computer Aided Design of Construction Facilities of Ural Federal University Vladimir Alyokhin visited the Antarctic as part of an international expedition to study global climate change and local fauna.The expedition lasted 9 days and passed through the Shetland Islands and the Drake Channel. Members of the expedition studied how global warming affects the continent.

“Having bathed in the cold waters of the Antarctic, I once again came to convince myself that university staff has great health,” said Vladimir Alyokhin. "When leaving the board of the ship I handed the flag of the university to the captain of the expedition ship.”

In the future, it is planned to use the results of the expedition in scientific works at the department.