Sergei Kulakov, a GSEM alumnae, met with his former faculty and students 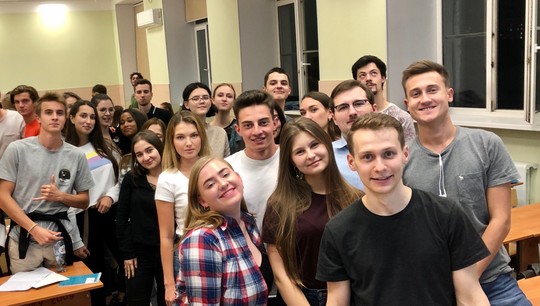 Sergei left a lot of close friends in Yekaterinburg to study and lecture at University Duisburg-Essen (Germany). Photo: Iana Lopatkova.

A graduate of the Graduate School of Economics and Management Sergey Kulakov told us how UrFU helped him realize himself in the professional field. Today, Sergei is an employee of the University of Duisburg-Essen (University Duisburg-Essen, Germany), where he gives lectures on environmental economics and renewable energy.

“At UrFU I really liked the balance between studies and extracurricular activities. Compared to many German universities - now I almost finished my doctorate in Germany - UrFU pays much more attention to sports and various activities that strongly unite student groups,” says Sergei Kulakov. - I have left a lot of close friends in Yekaterinburg, as well as many fond memories of achievements that were not directly related to my studies. UrFU provided opportunities for the development of social skills, which, in my opinion, are no less important than academic knowledge. ”

At the Graduate School of Economics, Sergei finished an undergraduate program. Then he studied at the European University of Viadrin (Germany), where, under the guidance of Professor Costas, he prepared a report on the essence of leadership. At the end of the course, a German university invited a student to study for a master's degree.

“I was finishing my undergraduate program, which laid the foundation for my further education. It is difficult to name any specific knowledge or skills acquired at that time. All skills played their part in my professional career,” says Sergey. “The fact is that UrFU is a worthy university, which gives students a strong academic background and provides many opportunities for finding useful contacts.”

During his studying at UrFU, Sergey participated in business games, performed as part of a team at the regional stage of the championship to solve "Changellenge" cases, as well as took part in scientific conferences. In addition to studying, he went in for sports: he is a candidate for master of sports in powerlifting and bench press (Candidate for master of sports - a semi-pro in Russian qualification).