Scientists Look for Vaccine from COVID-19 in Marine Sponges
More

Scientists Look for Vaccine from COVID-19 in Marine Sponges

Researhers will cultivate substances in Russia 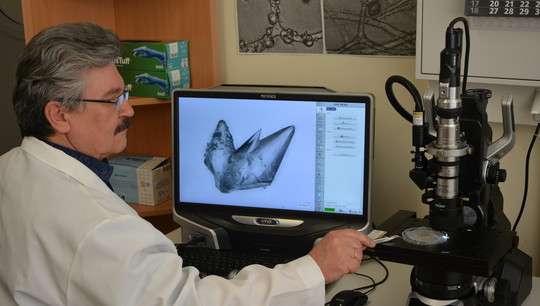 Bromothyrosines were obtained in the laboratory of Herman Erlich, a professor at the Freiberg Mining Academy. Photo from the Herman Erlich archive.

“The sea sponge Aplysina aerophoba naturally produces antiviral substances - bromothyrosines - protection against viruses, bacteria and other microorganisms,” says Ural Federal University researcher Yulia Khrunyk. “In the laboratory of our German colleague, professor of the Freiberg Mining Academy German Erlich, the substances were obtained in sufficient quantities to be immediately used in clinical trials against the new coronavirus.”

The antiviral properties of bromothyrosine have also been confirmed by other scientists: it has been shown that aeropisinin, bromtyrosine from the sea sponges Aplysina aerophoba and Verongula rigida inhibit HIV replication, which indicates its great therapeutic potential for the treatment of various viral diseases.

In addition to the use of sponges for the production of bromothyrosines, scaffolds of sponges, three-dimensional porous matrices that act as a mechanical frame, are of great interest for biotechnology and medicine. Together with a group of professor Erlich, Ural Federal University scientists Yulia Khrunyk and Sergey Belikov are researching scaffolds of different types of sea sponges in order to use them as potential biomaterials, including for implantology. In particular, Khrunyk conducts a comprehensive analysis of the immune response to the material of the studied scaffolds in order to exclude possible inflammatory processes when they are used as biomaterials.

Ural scientists are preparing to launch a startup for the cultivation of sponges in Russia - this will make it possible to obtain bromothyrosine and their derivatives, as well as scaffolds, without violating the environment and without harming natural resources.

The largest reserves of Aplysina aerophoba are found in the European Mediterranean, especially off the coast of Montenegro, Croatia and Albania. Since 2014, a team of scientists led by Professor Erlich, together with biotechnologists from the Montenegrin Institute of Marine Biology, has been monitoring the sponge farm.