Rector Koksharov will hold the position in next five years 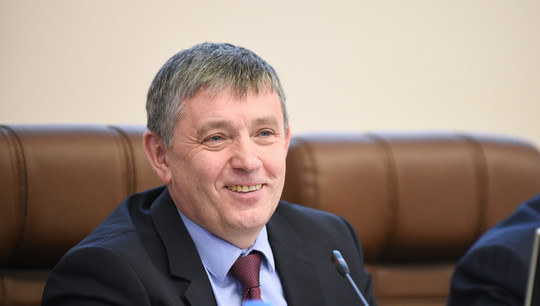 Victor Koksharov was appointed rector of the Ural Federal University for a five-year term; the corresponding order was signed on April 13 by Russian Prime Minister Mikhail Mishustin. Earlier, Koksharov’s candidacy was supported by the University’s Supervisory Board, headed by Dmitry Pumpyansky, Chairman of the Board of Directors of TMK and President of the Sinar Group.

“Victor Anatolyevich Koksharov has established himself as an authoritative and responsible leader,” Pumpyansky noted. - Heading UrFU for 10 years, he understands well the aspirations of students, teachers and employees, and is responsive to the demands of the external environment - graduates, partners, authorities and enterprise managers. The university introduced a system of project training, employers participate in the educational process and order research, the university’s position in world academic ratings is growing.”

The Chairman of the Supervisory Board emphasized that in the situation of the formation of the Ural Interregional Scientific and Educational Center (REC) of a world level, it is important to maintain the continuity of the university management team.

In the Sverdlovsk region, Koksharov’s work is also appreciated as the head of the council of rectors of regional universities.

“The university annually attracts thousands of talented students, teachers and scientists, including from abroad, having long become one of the backbone organizations of the region,” notes the Governor of the Sverdlovsk Region, member of the Supervisory Board of UrFU Evgeny Kuyvashev. - A lot of work remains to be done on national projects, in particular, on strengthening the positions of the Ural Interregional Scientific and Educational Center of a world level as a tool for the cooperation of education, science and production. I hope to continue constructive cooperation with Koksharov and as chairman of the council of rectors of universities in the region. Let me remind you that UrFU and our other universities will become owners of the legacy of the upcoming World University Games in Yekaterinburg.”

Was born on August 1, 1964 in Kamensk-Uralsky, the Sverdlovsk region.

In 2007-2009 he worked as Chairman of the Sverdlovsk Region Government. Dr. Koksharov was appointed the Rector of Ural Federal University by the Decree of the Chairman of the Government of the Russian Federation, Vladimir Putin.

Participated in the study programme of the US Information Agency for the State Support for Small and Medium Business. Underwent internship within the programme "Direct foreign investments' in the  Joint Vienna Institute.

Fluent in German and English. Married. Has a daughter.