Science Education Mathematical Center to Be Established in Urals
More

Science Education Mathematical Center to Be Established in Urals 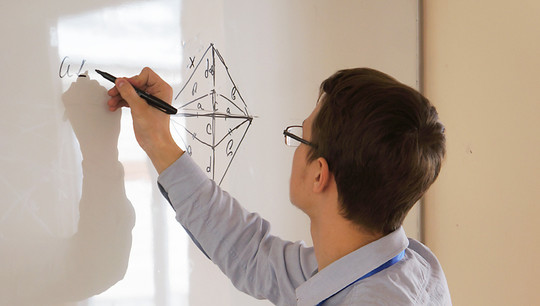 In 2020, the volume of investment in the creation and development of the Ural Mathematical Center will amount to 80 million rubles. Photo: UrFU Liceum.

In 2020, a regional scientific and educational mathematical center will appear in the Urals. The Ministry of Science and Higher Education of the Russian Federation decided to create four new mathematical centers in the regions - in Ural and Volga Federal Districts, in Eastern Siberia and the Far East.

Ural Mathematical Center is being created on the basis of the Institute of Mathematics and Mechanics of the Ural Branch of the Russian Academy of Sciences, the Ural Federal University and the Udmurtia State University. Among his main tasks are the development and popularization of mathematical science in the regions and the training of personnel, including the involvement of schoolchildren and their teachers in the activities of the centers. Particular attention is planned to be paid to training specialists and obtaining high-level scientific results. In 2020, the volume of investment in the creation and development of the Ural Mathematical Center will amount to 80 million rubles.

“The center will allow not only to preserve and develop the leading mathematical schools of the Ural region, but also to form new scientific schools in relevant areas of modern mathematics and related sciences,” says Vladimir Kruzhaev, vice-rector of the Ural Federal University for Science. - It is extremely important to involve talented young mathematicians in research. It is planned to organize and conduct a series of events within the framework of the program for the development of mathematical education in the Urals: olympiads, conferences and seminars for schoolchildren, undergraduate and graduate students, conferences for teachers of mathematics, including continuing education programs. The new center is a reflection of the existing scientific interaction of the university with the academic institutes of the Ural Branch of the Russian Academy of Sciences, in this case, close interaction with the Institute of Mathematics and Mechanics.”

Vladimir Kruzhayev also notes that the expansion of cooperation with leading Russian and foreign research and education centers will play a crucial role in the work of the center. Under great focus will be the coordination of the work of the network of regional scientific and educational mathematical centers of the country in cooperation with Russian world-class mathematical centers.

Today, in Russia there are five regional scientific and educational mathematical centers - in the Central, Volga, Southern (two centers) and Siberian federal districts. Thus, this year the number of such centers will increase to nine. In 2020, the Ministry of Education and Science of the Russian Federation plans to allocate 360 ​​million rubles to support them.