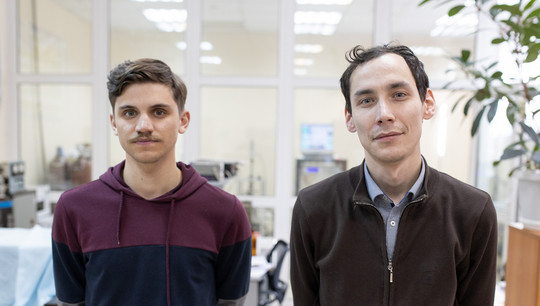 Scientists of the Ural branch of the Academy of Sciences and the Ural Federal University have created a new luminescent material for individual dosimetry based on lithium-magnesium phosphate, LiMgPO4 (poorly studied but promising material). The research process and results are presented in articles in the Journal of Alloys and Compounds and Nuclear Instruments and Methods in Physics Research.

The substance is being worked by Mikhail Kalinkin, graduate student of the Institute of Solid State Chemistry of the Ural Branch of the Russian Academy of Sciences, and Rinat Abashev, associate professor of the Department of Experimental Physics of the Ural Federal University, and a researcher at the Institute of Metal Physics. They were the first in the world to conduct a fundamental study of a lithium magnesium phosphate matrix. As a result, it was revealed how defects that occur during the synthesis of a substance during its heat treatment and doping with rare-earth elements affect its thermoluminescent properties.

“We subjected LiMgPO4 to heat treatment in various media - argon, pure oxygen and air, that is, in gas media with different oxygen partial pressures, at a temperature of + 900° Celcius. It turned out that the lower the concentration of surface defects, the higher the intensity of thermoluminescence of this material. The smallest defects occur during annealing in a medium with a maximum amount of oxygen, that is, in pure O2, and most of all during heat treatment in an argon atmosphere. Understanding these patterns has made it possible to synthesize new material based on lithium-magnesium phosphate with desired properties,” explains Mikhail Kalinkin.

The experiments showed that the most effective synthesis method is melting followed by crystallization: melting of lithium-magnesium phosphate occurs when heated to + 1250° Celcius, crystallization process at room temperature. As a result, the surface area and the number of surface defects in the material become minimal.

Researchers have chosen terbium for doping LiMgPO4. Firstly, this rare-earth element is easily integrated into the crystal lattice of lithium-magnesium phosphate. Secondly, when the starting material is irradiated with a source of ionizing radiation and then heated, terbium enhances the output of thermally stimulated luminescence (in other words, the output of energy accumulated during training) and gives a pronounced green glow, which is distinguishable not only by devices, but also under certain conditions by human vision.

“Thus, the combination of lithium-magnesium phosphate with terbium is effective for recording radiation doses. The experiments showed that the substance synthesized by us is not only not inferior to analogues, but in some cases more effective than them. It can be used in any field related to ionizing radiation sources in the range of accumulative dosimeters - from dozens of microgray to dozens of gray: in nuclear medicine, nuclear power plants and so on,” comments Rinat Abashev.

The project of Mikhail Kalinkin and Rinat Abashev “Comprehensive study of phosphates and borates as optical matrices for solid-state radiation dosimeters” was supported by the Russian Science Foundation. They are currently working on improving LiMgPO4, doping it with other rare-earth elements - they increase the transparency of the material and improve its ability to permanently retain the energy received during irradiation: this determines the completeness of the light output and the accuracy of measuring radiation doses with a dosimeter.