UrFU Assistant Professor Qualifies for the Semifinals of the 'Leaders of Russia: Politics' Contest
More

UrFU Assistant Professor Qualifies for the Semifinals of the 'Leaders of Russia: Politics' Contest 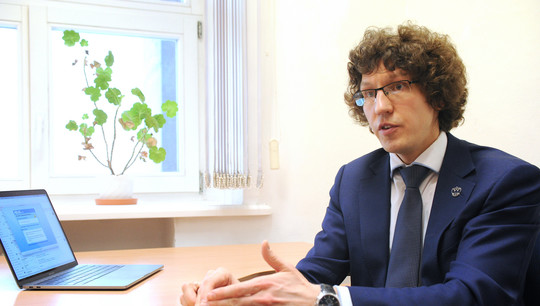 Since 2014, Sergey Zvonarev has been actively involved in social activities. Photo: Vladimir Petrov.

Associate Professor of the Department of Physical Methods and Quality Control Instruments of the Institute of Physics and Technology of UrFU Sergey Zvonarev reached the semifinal of the competition “Leaders of Russia. Politics". He plans to help young scientists - including through streamlining organizational and managerial activities.

“In the near future I would devote myself to solving the personnel problem in the scientific and educational fields. This is one of the main tasks of the national projects “Science” and “Education”. It is necessary to create opportunities for identifying talented youth, to show possible development paths for young scientists, teachers, specialists,” explains Sergey Zvonarev. - The task of attracting the best young children to these areas is now particularly acute. It is necessary to increase the availability of research infrastructure facilities for young scientists and encourage them to create their own teams to solve the urgent problems of science and technology. ”

Another important task, according to Zvonarev, is to create a program to popularize science and actively involve young scientists in it, for example, through the project #ЯвНауке.

The first stage of the competition included online testing of participants in social studies and assessment of the leadership potential of the contestants, 8676 participants passed through it. The best test results were shown by 511 people (among them - 13 from Yekaterinburg). Another 30 people showed results no worse than 75% of the contestants, and at the same time received the most support on the contest website from their supporters. In total, 33,986 applicants submitted applications for the competition. Full-time semi-finals - control testing and assignments in groups - will take place after the epidemiological situation stabilizes in Russia.

Winners of the competition can participate in the elections to the State Duma or become members of the Federation Council. Based on its results, 70–80 people will be selected, who will be trained by 12 mentors at the Higher School of Public Administration of the RANEPA, including deputies and senators.