Semyon Kozmin, a WWII veteran, taught history at university for over 20 years 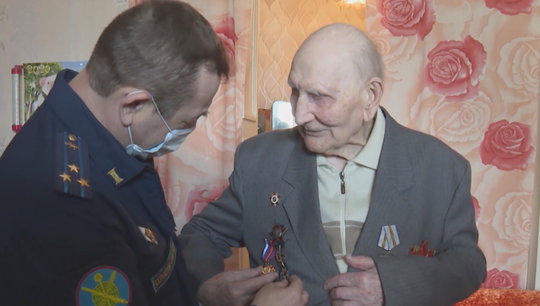 The military on the eve of Victory Day hold an action "Parade for every veteran." Photo: Press Service of the Central Military District.

The military of Yekaterinburg hold an action "Parade for every veteran." On April 23, they congratulated the upcoming Victory Day on the 104-year-old colonel, veteran of the Great Patriotic War and the Ural Federal University, Semyon Kozmin.

On a moving screen deployed under the windows of a front-line soldier, servicemen showed a car waltz on an UAZ army off-road vehicle. Automotive calculations performed the construction in the form of the number 75, synchronized driveways in the form of a figure of eight, “movement to the front”, “mark on the map” and other elements of figure driving.

“At the end of the show, the convoy passed in a single system, as during the ceremonial passage of the mechanized convoy in front of the podium on Victory Day, maintaining a uniform speed, distance and intervals between cars,” the Center Military District staff noted.

In addition, the veteran was visited by Acting Deputy Commander of the Central Military District for military-political work Colonel Andrei Sobolev. The officer handed over the congratulatory address, gift set to the front-line soldier and presented the medal “75 years of Victory in the Great Patriotic War”.

Semyon Semyonovich Kozmin was drafted into the army. He served as a political worker. He was awarded the orders of World War II degree and the "Red Star", the medal "For Military Merit", and other awards. He fought on the main fronts of World War II, after its completion he served in military units in Sakhalin, Western Ukraine, in the Urals.

For 22 years, Semen Kozmin worked at the Ural State University (now UrFU), taught general history courses at various faculties. At 59, he defended his thesis. In 2018, he released his memoirs “On Love and War”. The basis of the book were letters that the veteran exchanged with his wife during the Great Patriotic War.