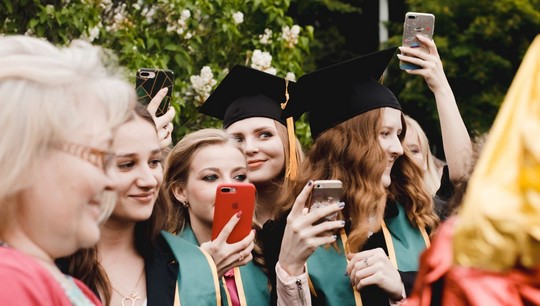 The live broadcast of the festivities will be open to all comers. Photo: UrFU photo club.

The graduation of the Ural Federal University in 2020 will be held for the first time in an online format. This was announced on April 29 by the rector of UrFU Victor Koksharov.

“Caring for the safety and health of students, we are the first in the country to announce a large-scale graduation in online format and encourage other universities to join the initiative. Moreover, all traditions inherent in the holiday will not only be preserved, but also increased, ”Koksharov noted.

Graduates will be able to join the holiday from home. To do this, they will receive holiday sets with gowns, academic hats, scarves of the institute and special souvenirs. On the day of graduation, 6,000 yesterday's students will connect to online broadcasts and online interactions on social networks.

“The concert program will become more saturated, we will pay great attention to the interactive interaction of the participants of the holiday. The children will witness the many hours of telethon, will be able to communicate with each other live throughout the country, ”said Oybek Partov, chairman of the Student Union of UrFU.

The graduation can be opened by a live performance of the student anthem Gaudeamus by dozens of vocalists from all over the country. Especially for the holiday, the Student Union plans to present the graduation track. Graduates, their parents and teachers will become the heroes of direct broadcasts of the university television of Ural Federal University, and the holiday will end with a cover concert from the creative teams of the university. The live broadcast will be open to all comers.

In the Student Union, graduates are encouraged to subscribe to the VKontakte project group. In the coming weeks, it will become a center of information on the schedule and details of the holiday, online interactions, special bonuses for graduates from the university and partners.

In addition, on April 29, the logo and corporate identity of the anniversary of the Ural Federal University were presented, a large-scale multimedia ceremony was announced on October 23, 2020 at Yekaterinburg-Expo. Together with the general partner of the jubilee, SKB Kontur, the university began to work on the concept of the new Kontur-Park scientific and technological center.