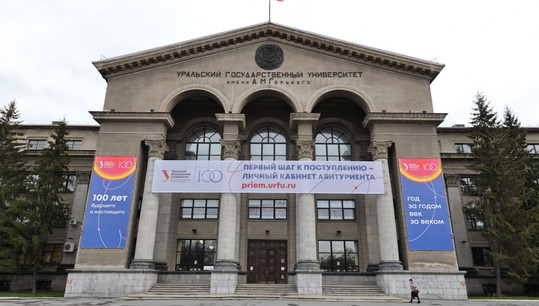 The symbol of the 100th anniversary has already appeared on the facade of the first academic building. Photo: Ilya Safarov.

The central event of the 100th anniversary of the Ural Federal University will be a multimedia ceremony in the Yekaterinburg-Expo Congress Hall. Representatives of the university and the general partner of the holiday, SKB Kontur Company, made a presentation of corporate identity and anniversary events.

“Thanks to our students and partners, the attributes of the 100th anniversary will be sent to different parts of the world. Our anniversary identity is about the inextricable connection of the past with the future, about the importance of the individual path in scientific discoveries and training. About a university similar to space: stellar, bright, attracting inquiring minds, ”said the rector of UrFU Victor Koksharov.

The first owners of diaries in the style of the 100th anniversary will be university student activists and journalists of Yekaterinburg. Already in the summer, memorable souvenirs will be received by the leaders of the rating of extracurricular activities and graduates of UrFU 2020.

Especially for the anniversary in early May, the university will open an expanded portal of the holiday. The service will allow you to interactively get acquainted with the history of the university, learn about anniversary events, join marathons of online congratulations and memories.

“The main day of the anniversary events will be October 19 - the foundation day of the university in Yekaterinburg. In the same week, we expect to bring alumni, students, teachers and veterans to a multimedia ceremony in the congress hall. Online broadcasting of the event will also be available,” added Rector Koksharov.

One of the events dedicated to the anniversary may be the city festival of UrFU and SKB Kontur. “IT Picnic” on September 12, International Programmer’s Day, will present to citizens in an interactive format the latest achievements of the IT world, and will allow everyone to become part of the world of information technology.

“Advanced production cannot be divorced from science and education. And we are glad that we have such a partner as UrFU. We have been cooperating for more than 10 years. We conduct an internship, an industrial development school, support ACM and CTF competitions, and restart FIIT together. This year, our partnership is entering a new stage: we agreed to work out the concept of the Kontur-Park scientific and technological center together. Therefore, we could not help but take part in such an important event for Ural Federal University as the 100th anniversary of its founding,” said Dmitry Mramorov, Chairman of the Board of Directors of SKB Kontur.

The SKB Kontur company will become the general partner of the anniversary of Ural Federal University. Together with the IT partner, the university began to work out the concept of the new Kontur-Park scientific and technological center. The memorandum of cooperation was signed remotely on April 29 in the Kontur. Diadoc e-document system.