Triazavirin Production Goes Up to 7 Thousand Packs per Day
More

Triazavirin Production Goes Up to 7 Thousand Packs per Day 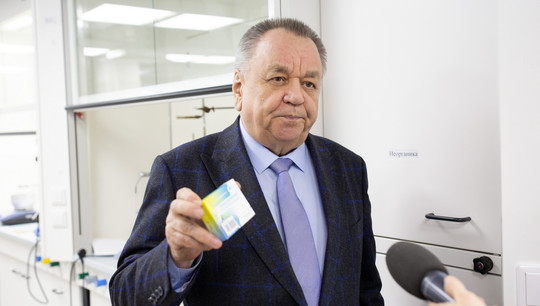 According to Vladimir Rusinov, Triazavirin is recommended by doctors of the Sverdlovsk region for the prevention and treatment of coronavirus. Photo: Polina Pogrebitskaya.

Because of Covid-19, the pharmaceutical company Medsintez increased the production of Trizavirin from 3 to 7 thousand packages per day. The data was announced by the head of the Department of Organic and Biomolecular Chemistry of UrFU Vladimir Rusinov during a press conference at the Interfax-Ural news agency. The scientist also said that "Triazavirin" is used against coronavirus not only in the Sverdlovsk region, but also tested in Moscow, St. Petersburg. In Krasnoyarsk, the drug was successfully used to treat tick-borne encephalitis.

“What is especially important - in the treatment of influenza with Triazavirin in patients burdened with chronic diseases such as diabetes, hypertension and others, treatment takes place without consequences for the underlying disease,” says Vladimir Rusinov.

In addition, Ural scientists (UrFU and the Institute of Organic Synthesis of the Ural Branch of the Russian Academy of Sciences) are working on the creation and implementation of new drugs together with St. Petersburg colleagues (the Research Institute of Influenza).

“Epidemics come and go, and we live with it. We are accustomed to a flu epidemic in the fall and tick-borne encephalitis in the summer. Therefore, you need to get used to the fact that new variants of coronavirus may appear. Today’s epidemic is the third strain, ”explains Vladimir Rusinov. “Over time, viruses become resistant to drugs, so you need to constantly work on the creation and implementation of new forms of drugs.”

“The situation with coronavirus has shown that we need a drug that acts not only on the disease, which in turn causes a number of complications. We need anti-inflammatory drugs, says the chemist. “Now we are developing a drug that protects - at least at the level of mice - from sepsis caused by various biological methods.”

According to the results of experimental tests of the drug for sepsis, scientists found that 80% of the mice survive. Now the future medicine is undergoing preclinical studies: its safety is determined and its specific effect is specified.

Scientists of the Ural Federal University, the Institute of Organic Synthesis, Ural Branch of the Russian Academy of Sciences, together with colleagues from the Research Institute of Influenza, studied a family of antiviral compounds - azoloazines. Among these compounds, they found molecules effective against a number of RNA-containing viruses, including influenza viruses, SARS, tick-borne encephalitis, hemorrhagic fevers and others. The first molecule that became the drug is Triazavirin. This is a five-tropic drug: on the fifth day in the treatment of patients with influenza in their blood there are practically no influenza viruses. Approved for use since 2014. Available in the Urals. At the pharmaceutical company Medsintez, a high-tech full-cycle line.